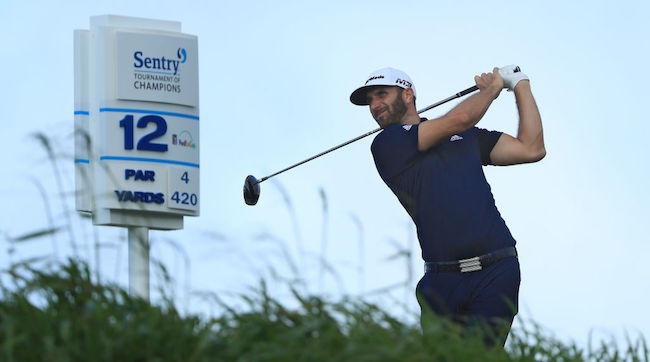 Last week, Dustin Johnson and wife Paulina Gretzky headed to Maui to celebrate their fifth anniversary while he competed in the Tournament of Champions at Kapalua’s Plantation Course. The world’s top-ranked golfer made the celebration a whole lot sweeter when he pocketed over $1.2 million after walking off the 18th green on the final day with an eight-stroke victory.

Johnson shot lights out over the course of his four days on the links, and nothing summed up his overall performance like his drive on the par 4, 433-yard 12th hole on Sunday. Thanks to the aid of a 12 MPH backwind and one hell of a downward slope, Johnson’s shot rocketed towards the green and made a beeline for the cup.

We might only be one week into 2018, but as you can see by the final result, Johnson might have already hit the drive of the year.

Sadly, the sheer will of the commentators and the spectators on the course failed to convince the ball to drop in the cup, and Johnson came inches away from an albatross before being forced to “settle” for an eagle to drop to -5 on the day on his way to a tournament-low round of 65.

There’s no doubt in my mind that Johnson was inspired by Happy Gilmore’s revolutionary strategy of holing the ball from the tee so you don’t have to bother with that whole “putting” thing. I’m personally disappointed he didn’t drop down on the green and yell at the ball to go home.

It probably wouldn’t have worked, but it could have been worth a shot.