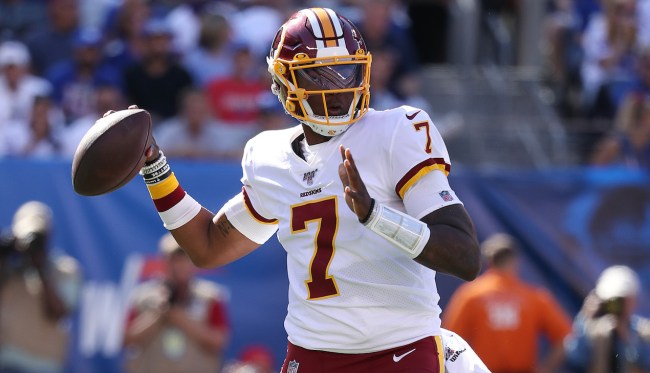 The night is going to get a whole lot darker before Washington Redskins fans get to see the dawn, at least according to one of the team’s coaches.

According to a report from ESPN’s NFL reporter Dianna Russini, a coach on the Washington Redskins staff said that rookie quarterback may not be ready to be the team’s starter for another year or two.

Russini said that the coach she spoke to indicated that Haskins may not be ready until the 2021 season, saying “not only is he not ready right now, but it could be a year — maybe even two more years — before Dwayne Haskins can actually be a starter in Washington.”

Additionally, Russini reports that Haskins is struggling with holding onto the ball too long, reading defenses, and calling plays in the huddle.

Yikes. Not that it’s right to bury a kid’s career before it ever even gets off the ground, but if the team who just drafted him in the first round isn’t sure he’ll be ready by 2021, that certainly does not bode well for his immediate football-playing future.

Despite the front office and on-the-field turmoil, the Washington Redskins actually have a chance at getting their first victory of the season this weekend as they travel to Miami to take on the equally pitiful Dolphins, who are also winless at 0-and-4.

Given that the Dolphins and the Redskins are in direct competition for the #1 overall pick in the 2020 NFL Draft, it would come as no surprise if the Bill Callahan-coached team started Haskins against the Dolphins to kill two birds with one stone: not only do they give the rookie valuable game time and therefore themselves a chance to evaluate him, but it also likely increases the chances that they lose to the Dolphins, giving them a leg up in their race to the bottom.