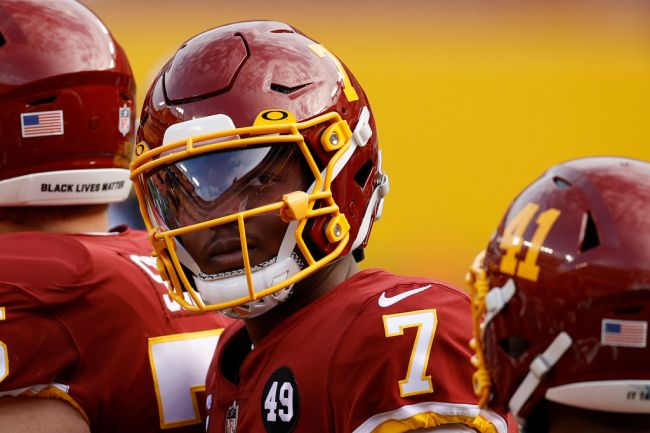 Shortly after the Washington Football Team fell 20-15 to the Seattle Seahawks, some Internet detectives went to work and found some photos of quarterback Dwayne Haskins allegedly at a strip club following the team’s loss. Not only was he allegedly at a strip club, but he was also spotted without a mask on, which some people seem to be more upset about than him essentially celebrating a loss.

Nicki Jhabvala of The Washington Post shared some of the photos, originally discovered by Rudy Gersten on Twitter. Jhabvala noted that Haskins has already been fined this season for violating COVID-19 protocols and that the NFLPA was made aware of the latest social media posts. According to his sources, the Washington Football Team is ‘aware’ of the situation as well.

Some of the photos of Haskins that circulated yesterday, including the tweet from @DCBarno, who appeared to notice it first pic.twitter.com/Kl3TZ2sVzD

Haskins was given the nod as the starting quarterback against the Seahawks with Alex Smith battling a calf injury and threw for 295 yards, one touchdown, and had two interceptions in the close game. To say this is a bad look for Haskins, who isn’t necessarily on the best of terms with the organization or head coach Ron Rivera, would be an understatement.

Put the fact that we’re in the middle of a pandemic aside, virus or no virus, heading to the strip club and partying shortly after a loss is one of the worst decisions Haskins could have possibly made.

Smith could return from injury this week for the team’s matchup with the Panthers, but if he doesn’t it’ll be worth keeping an eye on whether Washington gives the ball back to Haskins or goes with its third-string quarterback, Taylor Heinecke.