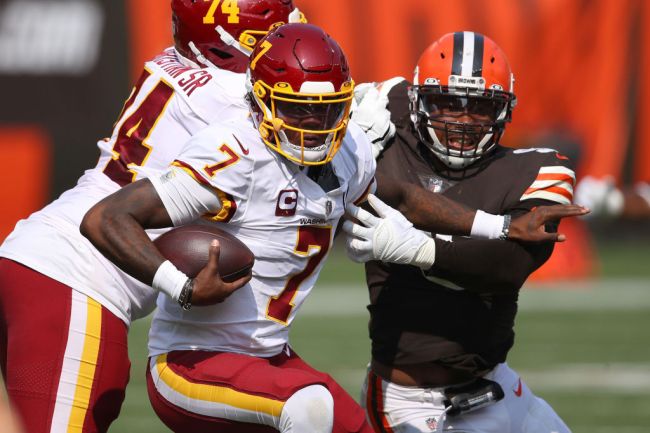 The Washington Football Team has turned things over to Kyle Allen having officially announced the benching of Dwayne Haskins ahead of the team’s Week 5 matchup against the Rams.

While the move is a surprise to some, head coach Ron Rivera did send out a bit of a warning shot after Haskins threw three picks in the team’s loss to the Browns in Week 3 saying “there is a cutoff point” when it comes to Haskins and any other starters on the roster.

Apparently, that cutoff point was the team’s loss to the Ravens last week, which arguably was Haskins’ best performance of the year as he went 32-of-45 through the air. At the end of the day, however, Washington is 1-3 and Rivera clearly thinks that Allen deserves a shot under center.

The team’s overall struggles and Haskins’ overall sub-par performance on the field this season isn’t the only reason behind his benching.

According to The Washington Post, Haskins’ work ethic has taken a tumble since the start of the season and he’s picked up poor study and practice habits.

Rivera’s benching of Haskins, the once-presumed quarterback of the future, after just four games was a surprise, given the seeming commitment the coach had made to playing Haskins the whole season. But inside the team’s practice facility, momentum for the move had been growing, a person with knowledge of the situation said, in part because Haskins had fallen into poor study and practice habits. The person said Haskins’s lack of preparation was hurting him in games, leading to overthrown passes and missed opportunities to hit open receivers.

If the report is true, it certainly sounds like Haskins did everything right leading up to the season, but doesn’t seem to have much in the tank left at the moment.

Haskins falls to the No. 3 spot on the Washington depth chart with Allen set to get the start on Sunday with Alex Smith backing him up.