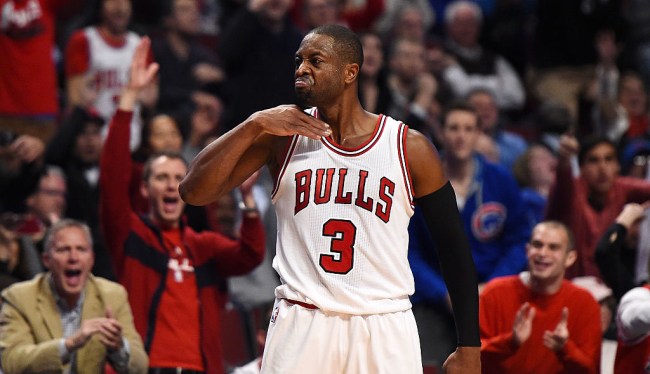 Many, including myself, just assumed that Dwyane Wade’s return to his hometown Chicago Bulls meant that he would be ending his long and storied career there. Apparently, if the many rumors flying around turn out the be true, that will, in fact, not be the case.

According to ESPN’s Nick Friedell, Wade is not exactly beloved by his younger teammates on the Bulls.

“The young players on the Bulls really can’t stand Dwyane. It’s no secret in Chicago, they have had enough,” said Friedell on The Jump.

Also, according to Friedell, it’s just a matter of time before the Bulls buy out Wade’s massive $24 million contract.

“This is inevitable. It’s coming. It’s just a matter of when not if,” said Friedell. “But right now, guys, it’s just kind of a staring contest. Everybody’s looking at each other saying ‘OK, how much money are you willing to give up?’”

He continued, “This is a divorce that’s going to happen. But it may take some time.”

Which leads us to Cleveland where Joe Vardon said on the Wine & Gold podcast, “As of right now, people close to James are fairly confident that, at some point this year, Dwyane Wade is going to end up on the Cavs.”

Something tells me, based on the way General Manager LeBron reacted to the Kyrie Irving trade, he would be just fine with that…

That's the only way to be to the kid! Special talent/guy! Nothing but respect and what a ride it was our 3 years together Young Gode #Filayy https://t.co/wKYmYsmdgG

Ainge says there probably will be a "delay" for Isaiah at the start of the season as he recovers from hip injury.

By the way, Wade tweeted this just as news of the trade was breaking…

Make of that what you will.