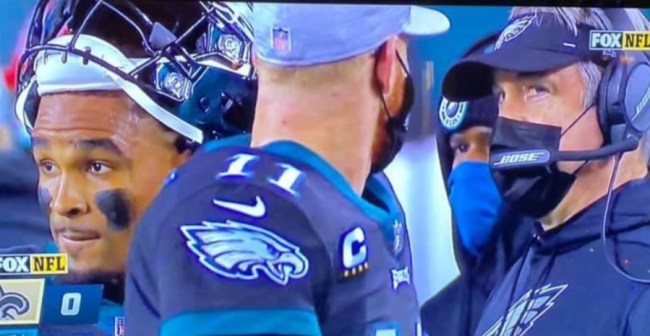 It really does seem like the Carson Wentz era is over in Philadelphia.

On Sunday the Eagles decided to bench Wentz in favor Jalen Hurts and the rookie QB led the team to a win against the New Orleans Saints.

Jalen Hurts leads the Eagles in an upset win over the Saints, 24-21 🔥

After the game Eagles head coach Doug Pederson didn’t commit to naming Hurts the starter for next week’s game but did say he got the “spark” he was looking for after he made the change at QB.

Via Zach Berman The Athletic

“We went into this week — a lot of stuff’s been piled on this football team this season . . . sometimes you look for an opportunity to jumpstart things, kind of reset. . . . It gave us a spark as a team that I was looking for,

During the team’s game against the Saints, Eagles fans noticed Pederson appearing to give Wentz the side-eye while on the sidelines.

when i tell you i’m fucking crying pic.twitter.com/8CHt8cGQnt

Eagles fans had some hilarious reactions to the Pederson-Wentz viral photo.

Lmao coach looking at his ass like yea buddy you finna ride that bench 😂😂😂 https://t.co/nFmIvlayq5

Time to pack up that locker 😂😂 https://t.co/UBO19itTkx

Wentz will be wearing a Broncos jersey next season https://t.co/tVwOcF2fLS