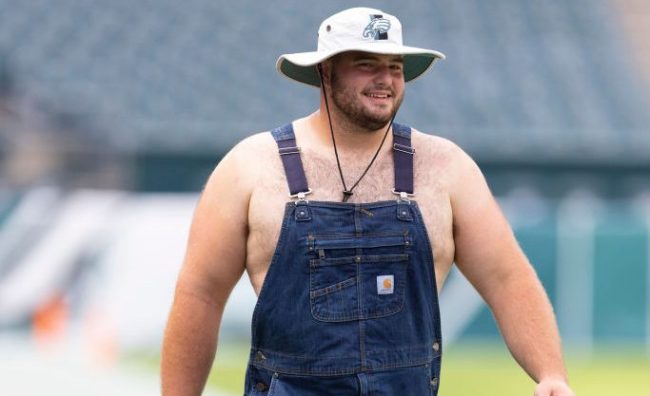 As defined by Merriam-Webster dictionary, a ‘Hoss’ is an informal noun that is synonymous with ‘horse’ used in representations of southern U.S. speech. More specifically, the slang term refers to a big person, usually a man, with some serious size.

Landon Dickerson is a hoss.

The 22-year-old Philadelphia Eagles rookie showed up to Thursday’s preseason matchup against the Patriots wearing overalls, Timberland boots and a bucket hat. No shirt.

Nothing keeps Landon Dickerson down.

Dickerson comes from Hickory, North Carolina and has had quite the journey to the NFL. The 6-foot-6, 350-pound big fella played his first three years of college football at Florida State but suffered three season-ending injuries in three consecutive seasons.

He ultimately transferred to Alabama for his final two years of eligibility and was absolutely dominant. Dickerson was named first team All-SEC, a unanimous All-American and was awarded the Rimington Trophy as the nation’s best center.

After an incredible final year on the NCAA level, the 22-year-old suffered a season-ending knee injury in the SEC Championship and missed out on the playoffs. That didn’t stop him from suiting up with his boys one last time as team captain and taking one final snap as the clock ticked down.

Dickerson is a funny dude (anyone who wears No. 69 has to be) and everybody loves him. Teammates, opponents and fans alike.

Alabama’s Landon Dickerson had to mess with Mac Jones at their Pro Day 😂 pic.twitter.com/5ovSFPiL1C

Drafted by the Philadelphia Eagles with the 37th overall pick in the 2021 NFL Draft, Dickerson is still working back from his injury. That didn’t keep his spirits down as he arrived to the sideline on Thursday looking like a hoss.

There’s a new fashion icon in town and his name is @Landon_2012.#NEvsPHI | #FlyEaglesFly pic.twitter.com/JsYuiyuG9Z

This is OL Landon Dickerson, who is not playing tonight, with his pre-game gear.#FlyEaglesFly pic.twitter.com/L4zm507J71

Now all we need to know is whether he showed up to Lincoln Financial Field on his new whip. 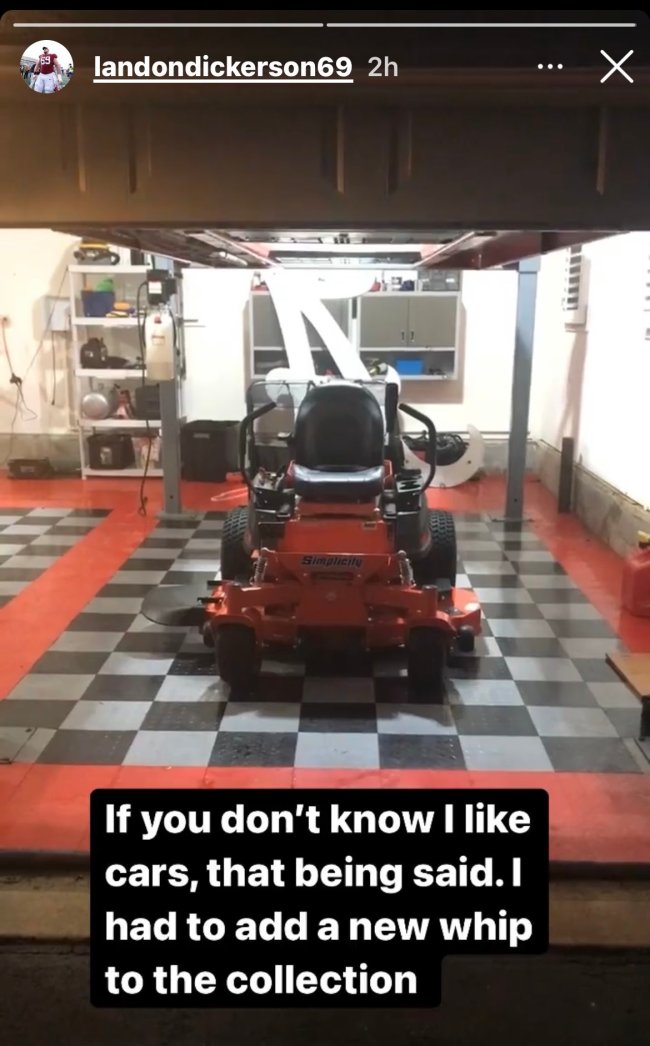