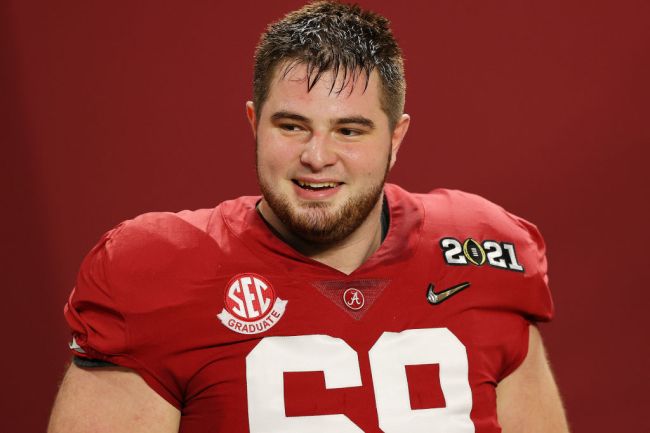 Alabama center Landon Dickerson a dude. The Redshirt senior was a five-star recruit out of Hickory, N.C. and committed to Florida State. He won the starting job when he arrived in Tallahassee as a freshman but played in only seven games before a knee injury ended the season. He worked back to the starting job as a sophomore but had his season cut short in Week 4. The same thing happened as a junior, just one game into the year.

After being granted a medical redshirt in 2018, Dickerson transferred to Alabama and earned the No. 1 role in fall camp. That’s no small task. He started in all 13 games in 2019 — four came at right guard and nine at center. As a redshirt senior this year, the 6-foot-6, 325-pounder anchored the Tide’s Big Uglies and earned unanimous first team All American honors.

He earned the respect of all of his teammates with his story, and wears No. 69, which means he must be a hilarious dude. You can’t consciously choose the No. 69 without knowing the stigma behind it. You can’t.

Dickerson was having one of the best years that a lineman can have as Alabama went undefeated into the SEC Championship against Florida. However, the year was cut short as he went down late in the game. Dickerson suffered a gruesome knee injury that ultimately forced season-ending surgery. Prior to his exit on a stretcher, his teammates all came off of the sideline to show love.

What do you think Landon Dickerson’s teammates feel about him? Ultimate sign of respect from his guys. pic.twitter.com/vnKlB9ZzTs

He was allowed to return to the field to watch the Crimson Tide finish off the Gators.

Watch Landon Dickerson on the sideline…. Dude is the best center in college football and has a season ending injury… but watch how great of a teammate this guy is. UNMATCHED ✊🏻 pic.twitter.com/b0DbWf9hGm

When Monday’s national championship rolled around, Dickerson was seen in uniform during warmups and took snaps with backup quarterback Bryce Young. He just wanted to take warmies with the lads one more time on the brightest stage. Alabama didn’t make the championship last season, so he never got the opportunity to play in the big game.

He was ruled out for the game and would not see the field, but Dickerson was dressed on the sideline as the nation’s top team took the field.

Alabama center Landon Dickerson suffered a knee injury in the SEC Championship and will not play tonight.

He couldn’t resist one last chance to suit up with the boys. #CFBPlayoff pic.twitter.com/T0KpSrqC8W

There is a small chance that Dickerson could come back next year, because every student-athlete was granted an additional year of eligibility due to COVID-19, but more than likely this will be his last game in a crimson helmet. Whether it be to the NFL Draft or the next chapter of his career, No. 69 was able to take the field in the 2021 title game. To make it that much better, he retained his previously-elected role as captain and went out to take the coin toss. 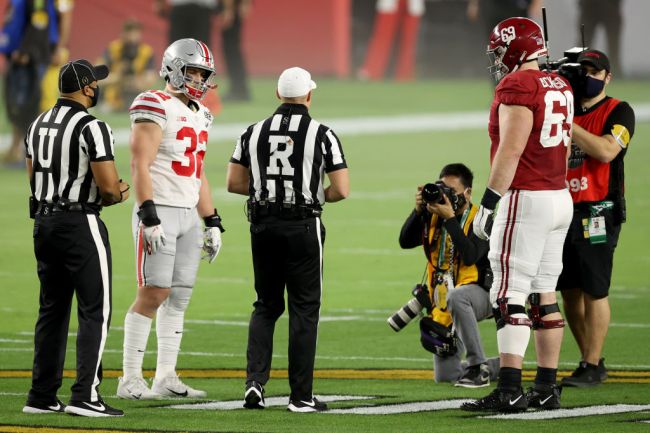 Alabama went on to beat Ohio State 52-24 to cap an undefeated season with a record night. Dickerson didn’t record a single snap during the first 59 minutes, but as the clock ticked down to below the minute mark, he made his way onto the field to hand the ball off for the final kneel down. All of the other 10 players in the huddle hugged him as he walked out to the line of scrimmage.

The celebration was on and Nick Saban went out to shake hands with Ryan Day. When the two were done talking, his lineman picked him up and carried him off the field.

Dickerson stood right next to his head coach at the podium during the trophy presentation and neither could stop smiling as Saban said he “enjoyed the ride.”