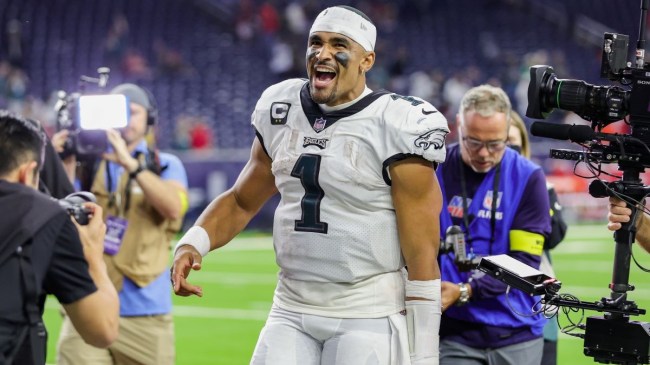 Philadelphia Eagles quarterback Jalen Hurts has taken a huge step forward in the third year of his NFL career. The Eagles selected Hurts with the 53rd overall pick in the second round of the 2020 NFL Draft.

The Oklahoma-via-Alabama product spent his rookie year as a backup to then-Eagles QB Carson Wentz. But he got the opportunity to make four starts due to Wentz’s injury issues. He threw six touchdowns and four interceptions in those starts, showing some promise for the future.

Hurts took the starting job in 2021 after Wentz was traded to the Indianapolis Colts. He again showed flashes of greatness but also struggled with accuracy at times. Hurts led the Eagles to an NFC Wild Card spot before they were unceremoniously dumped out of the playoffs by the Tampa Bay Buccaneers.

But 2022 has proven to be Hurts’ year. In his second season under head coach Nick Sirianni and with AJ Brown at his disposal, Hurts has blossomed. Philadelphia is the lone remaining undefeated team in the NFL at 8-0 and Hurts has been a big part of that equation. He’s thrown for 2,042 yards, 12 touchdowns and just two interceptions thus far. He’s also added 326 yards and six touchdowns on the ground.

The remarkably impressive first half has earned him plenty of shouts to win the 2022 NFL MVP award. Now, it appears that the jump in performance is all the more impressive as Hurts did it all while working a second job.

Jalen Hurts Reveals His ‘Side Hustle’ As A UPS Driver

Hurts took to Twitter on Saturday afternoon to make a shocking revelation. When he’s not playing quarterback, he’s working a second job as a UPS driver.

I never told y’all about my side hustle ? https://t.co/DXQPhXZQLa

Of course, the man in the video isn’t actually Hurts. But the resemblance is downright uncanny. And, honestly, I’d be surprised if there’s anything Hurts can’t do these days.