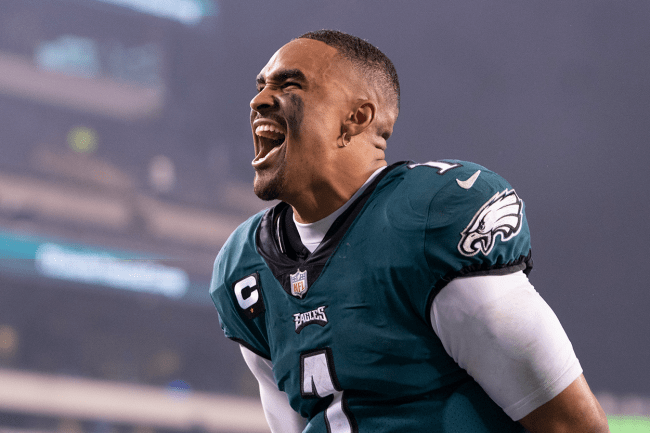 After a recent history of repeated failure while drafting wide receivers in the first round of the NFL Draft, the Eagles went a different route on Thursday. About halfway through the evening, it was announced that the Titans had traded wide receiver A.J. Brown to Philadelphia and the football world was set ablaze.

Not long thereafter, Brown got paid.

And then, not long after that, Tennessee selected Treylon Burks. Essentially, the Titans chose not to pay Brown and draft his replacement instead.

As for the Eagles, it was a move that gave Jalen Hurts someone to throw the ball to, finally. Per a report, it was something that the 23-year-old quarterback has wanted for some time and ultimately helped to orchestrate.

With having a long and extremely tight relationship, Howie Roseman told me Jalen Hurts had been, for a while now, whispering in their ear about going and getting A.J. Brown.

Once the trade was announced and official, the Philadelphia signal-caller and his new pass-catcher wasted no time making the introduction. They immediately hopped on FaceTime and couldn’t have been more pumped about playing with one another for the foreseeable future.

After some laughter and excitement, all Brown had to say was, “let’s do it man,” to which Hurts said, “say no more.”

Although the two are acquainted with one another from their time on opposite ends of the Alabama/Ole Miss rivalry in college, this will be the first time that they are linking up on the same team. They both seem pretty excited about what is to come, especially Brown with his new contract.