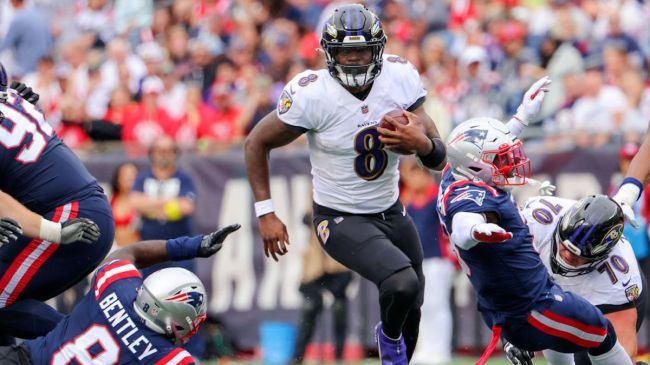 Baltimore Ravens quarterback Lamar Jackson failed to sign a contract extension during the offseason, and as a result, the former MVP went into the 2022 season placing quite a large bet on himself. And thus far, he has more than delivered.

Through the first three games of the 2022 season, Jackson has completed 63% of his passes for 749 yards, 10 touchdowns, and 2 interceptions. Given his dual-threat abilities, he’s also rushed for 243 yards and two touchdowns.

Those 243 yards on the ground, by the way, put him tied for fifth in the league alongside Christian McCaffrey and just behind Nick Chubb, Saquon Barkley, Cordarrelle Patterson, and Jonathan Taylor.

If Lamar keeps this pace up, his decision to play out the final year of his deal without his future contract locked up will undoubtedly pay off, as Jackson has certainly increased his worth thus far.

However, there’s also a darker, regrettable side to that coin: Jackson could also cost himself quite a lot of money. And given his otherworldly talent, the only way it seems that could happen is if he got hurt, which is something that Ravens legend Ed Reed recently discussed with The Ringer’s Kevin Clark.

Reed, perhaps the most beloved player in the history of the franchise, warned Jackson that the Ravens will essentially screw him over (I’m paraphrasing here) if he injures himself this season because they’re a “business first.”

“He’s just got to be smart,” Reed said. “I’m not telling him to play scared or anything because I don’t think he’s gonna do that, he hasn’t displayed that, but he has to be smart because it is a business and they will use that shit against you whether you like it or not. You can think these people love you. They’re showing their true colors right now. And it’s no shot at the Ravens because they are an organization that’s a business. It’s a business first. It’s the NFL and it’s football to the players and we love that, but it’s a business first to the league.”

Reed also said in no uncertain terms that his contract will be less lucrative contract when he hits free agency in March if he gets hurt.

“Yeah, of course, they ain’t gonna pay you as much,” Reed said. “It’s a business, bro. I don’t know how else to tell you clearer than that.”

Needless to say, I speak for all NFL fans (except, perhaps, some of the scumbag Browns fans we’ve seen at tailgates so far this season) when I say I hope Lamar makes it through the season unscathed and makes all the money he deserves.