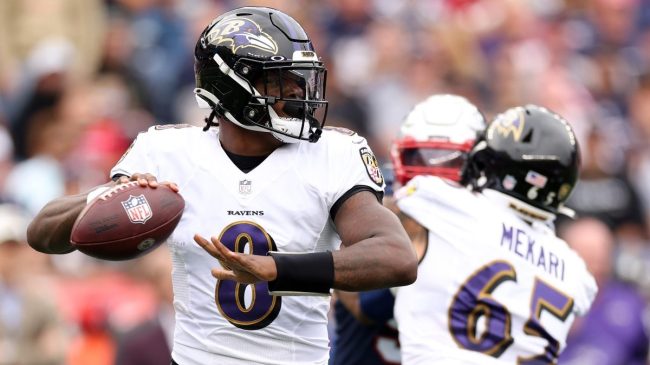 Lamar Jackson has been playing out of his mind to begin the 2022 season. The Baltimore Ravens have been scoring touchdowns at a significantly high rate, all thanks to their superstar quarterback. Any haters of Jackson should go ahead and sit down because this insane stat proves he deserves all of the MVP hype in the world.

According to Sheil Kapadia, Lamar Jackson has totaled 12 offensive touchdowns through three games (10 passing, 2 rushing), with is “more than 30 teams.” Turns out, the only two franchises with the same amount of touchdowns as Jackson, are the Detroit Lions and the Ravens themselves.

That's more than 30 teams through three weeks of the 2022 NFL season.

Every Ravens offensive TD has been a Jackson pass or a Jackson run.

I don’t know about you, but the MVP hype for Lamar Jackson makes complete and total sense. He’s playing out of his freaking mind to begin the season, which bodes well for the Ravens’ playoff hopes. The franchise has to be kicking themselves though, as the star quarterback is likely to ask for even more money next offseason.

Critics and haters tend to claim that Jackson is more of a running back. Anyone saying that now just straight up doesn’t know what they’re talking about. Let’s be real, those people likely aren’t even watching the games. Regardless, Lamar Jackson is playing as the absolute best player in the league right now and this bonkers stat proves it.

We still have a long season ahead and the Ravens are hopeful this high-quality play continues. If they can get the run game going again, along with better play from the defense, then Baltimore is going to be scary come playoff time. Look for Lamar Jackson to keep cooking his opponents, as there is no telling how big of a year he could have.