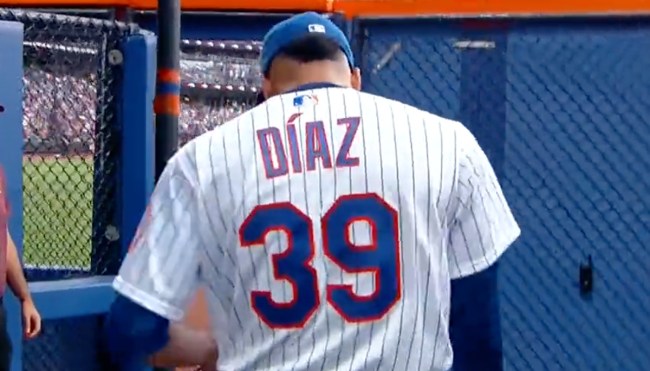 There aren’t many pitchers who’ve had the ability to instantly strike fear into the hearts of opposing players and fans quite like Mariano Rivera, the legendary Yankees closer who posted 652 saves (in addition to 42 in the playoffs) en route to becoming the first (and currently only) player to be unanimously inducted into the Baseball Hall of Fame.

Rivera’s biggest weapon was the filthy cutter he routinely used to make batters look simply foolish. However, I’d argue you can’t overlook the psychological edge he had while playing at home, as there weren’t many things capable of getting Yankees Stadium rocking quite like Rivera making his way to the mound while “Enter Sandman” blasted through the speakers.

That tradition is hard to top, but another team in New York has given it a run for its money courtesy of the Mets and Edwin Diaz.

The formidable closer also has his own secret weapon in the form of “Narco,” the certified banger by Blasterjaxx and Timmy Trumpet that he uses for his walkout music.

Last week, Diaz was forced to play the tune in his head when he (and everyone else at Citi Field) was deprived of the chance to see his signature entrance after it was preempted by an announcement on the public address system.

Thankfully, that was not the case when Diaz was called in to do what he does best during Sunday’s game against the Braves, as a camera followed him making his way to the mound while the trumpets blared in a video that baseball fans absolutely devoured for reasons that should be clear as soon as you watch it.

After seeing that, it’s easy to see why one Mets fan recently went viral after getting his fiancée to agree to use “Narco” as the entrance song at their wedding reception (with a little bit of help from the internet).