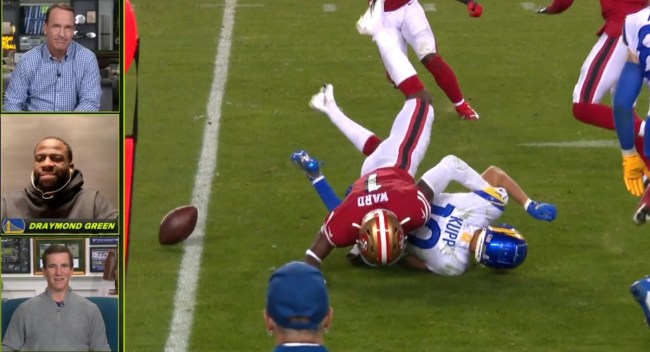 Eli Manning nearly got himself in some hot water when he randomly brought up the name of a deceased former NBA player during the latest edition of the Manningcast.

While interviewing Warriors forward Draymond Green, the producers of the Manningcast showed a list of the 34 players drafted before Green. On the list was Fab Melo, who tragically died in his sleep back in 2017.

Fab Melo’s name caught Eli’s eye, and he nearly cracked a joke before Draymond let him know that Melo had passed.

They’re talking about all the guys drafted before Draymond who weren’t as good as him. Eli picks maybe the WORST example.

It’s clear that Eli didn’t know about Fab Melo’s death, but viewers at home watched in horror during the segment.

There was almost a very awkward moment on the ManningCast where one of them asked Draymond if Fab Melo was still playing. The delay saved that from getting weird.