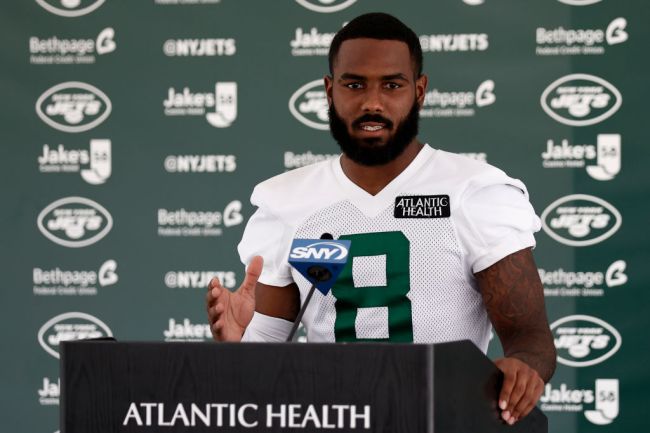 New York Jets second round pick Elijah Moore might only be a rookie, but he’s already one of the twitchiest receiver in the NFL. The 21-year-old from Ole Miss is turning heads in training camp and will be a crucial part in the team’s rebuild around franchise quarterback and No. 2 overall pick Zach Wilson.

Multiple clips of Moore have surfaced from Jets camp over the past few weeks and every video is more ridiculous than the one before. He had put his defender in a blender on Monday afternoon.

Comments on the video came from Odell Beckham Jr. and Moore’s former teammate A.J. Brown, among other NFLers.

Moore, who was robbed of the Biletnikoff Award in 2020, left Mississippi after averaging more than 11 yards per catch in all three of his collegiate seasons. As the primary receiver in Lane Kiffin’s explosive offense last season, 8-ball (he wears No. 8) recorded 86 catches for 1,193 yards in only eight games.

He averaged an astonishing 13.9 yards per catch and was on pace for an absurd 129 catches and 1,789 yards in a full 12-game season. Oh, and he made catches like this.

At 5-foot-10, 178 pounds, Moore will presumably play inside in New York. However, he has breakaway speed that allows him to get open down field.

His twitch and ability to change direction is unmatched.

And this isn’t a new thing. Moore has been shaking corners out of their shoes since high school.

He and Wilson met up before the season began and put in work to establish what assumes to be an extremely important connection when it comes to the success of the Jets in 2021.

Zach Wilson and Elijah Moore are together in Florida putting in work before training camp 🔥#Jets pic.twitter.com/TBfJ0PSZ9l

The work has payed off, because the two are firing on all cylinders in camp. Moore is going deep and Wilson is finding him.

Zach Wilson throws a gorgeous dime to Elijah Moore for a touchdown#Jets pic.twitter.com/l7eF7ixPF3

When things get crowded, Wilson throws his receiver open and Moore makes the nice snag.

They’re going to be a lot of fun to watch together.

Put the NFL on notice, Elijah Moore is coming.