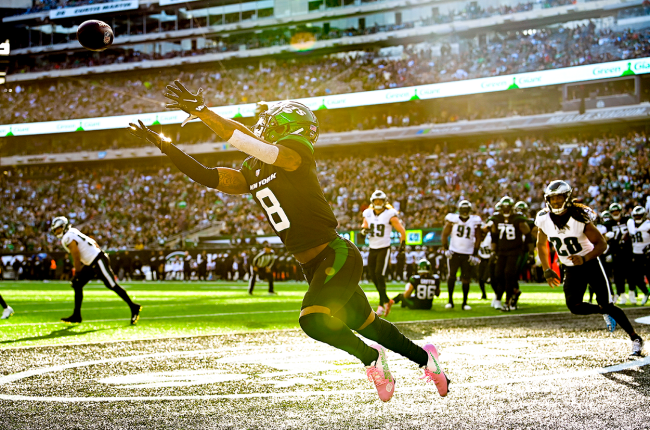 Somehow, some way, Elijah Moore slipped to the second round of the 2021 NFL Draft. The former Ole Miss wide receiver broke the team’s single-season receptions record during his junior year and did so in only eight games.

After being selected by the Jets with the No. 34 overall pick, he immediately burst onto the scene as a rookie. New York undeniably lacked at the wide receiver position last year, but Moore picked up the pieces.

In just 11 games, Moore was the most-targeted player by quarterback Zach Wilson and led the team in both receiving yards and touchdowns. He is an absolute nightmare to deal with in the slot and already has the entire league on skates.

While the Jets definitely needs to upgrade at the receiver position, because Moore cannot really be split out wide, the team is in great hands (literally) with the former Rebel. He is poised to be a prominent part of a young offense in New York and has already begun to carve out a nice career for himself over the middle.

With a few months until the 2022 NFL season gets underway, late March/early April is the prime time of year for players to take one last vacation. They can ramp up their training regimen when they get back and really just enjoy some R&R.

Moore is doing exactly that and made one of the most ridiculous one-handed catches that you will ever see while on vacation at a beach somewhere.

In the video that Moore originally posted to his Instagram, he runs a go-route against an unknown challenger and gets a step on his man. However, once he sees that the ball was under-thrown, he turns back to the other side, tracks the pass, goes up and comes down with a truly unbelievable catch using only his left hand.

Jets fans, don’t worry. He did not injure himself.

Take a look at the truly insane snag:

#Jets WR Elijah Moore (@e_moore03) just had one of the craziest one-handed beach catches of all time! There is no more debate clearly WR1 on and off the field! 🎥elijahmoore IG @SportsCenter #SCTop10 #TakeFlight @OleMissFB @nyjets pic.twitter.com/mtpuIlPMjl

As Moore gears up for his sophomore year in the NFL, he is clearly not lacking any explosiveness or athleticism. Goodness gracious, what a catch!