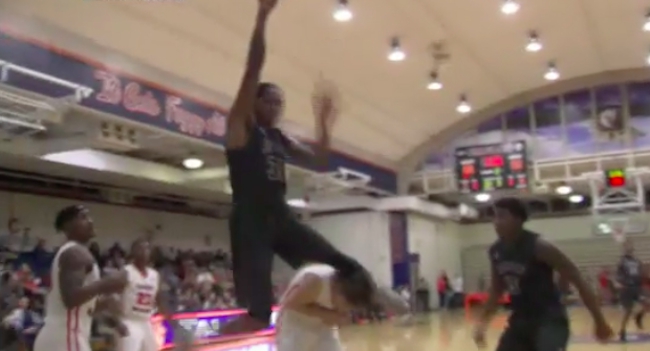 At the 2000 Summer Olympic Games in Sydney, Vince Carter intercepted a pass during the United States’ game against the French and immediately drove to the paint. The only thing standing between him and the basket was seven-foot-two defender Frédéric Weis, which would present a bit of a problem for most players. However, Carter— who is not most players— was unfazed and managed to turn the steal into a score after jumping over the Frenchman to pull off what might be the best dunk in the history of organized basketball.

Based on basically every single slam dunk competition I’ve seen since then, jumping over people has become commonplace, but it’s a bit easier to convert when you’ve had months to practice and know the person you’re vaulting over isn’t going to try to swat your shit on the way to the hoop. To actually pull it off during a game requires a fair amount of skill and an infinite amount of luck, and it appears Division II player Emanuel Terry was blessed with both.

The Lincoln Memorial University forward was on the court during an inbound attempt in Wednesday’s game against Carson-Newman and signaled for his teammate to throw a lob towards the basket as he cut towards the lane. In most cases, his ability to throw down the alley-oop with one hand would be the most impressive part of the play, but he managed to upstage himself by jumping over the back of an unsuspecting player in the process.

.@EmanuelTerry08 takes the No. 1 spot on #SCtop10 for an all-time dunk in @LMUMBB's win at Carson-Newman tonight @espn @SportsCenter 👀 pic.twitter.com/FncHghkvYY

At least the victim can tell people he was on SportsCenter.