Eminem Shares Story About Jokingly Telling Michael Jordan He Was Going To Dunk On Him: ‘It Was Crickets’ 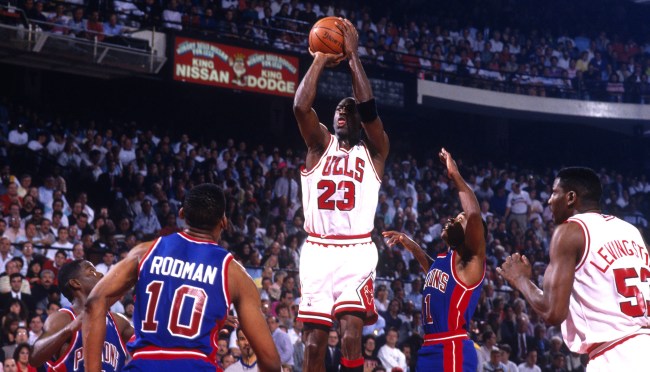 Eminem recently appeared on Sway In The Morning to talk about what he’s been doing in self-isoltion when talk turned to the ESPN documentary series about the 1997-1998 Chicago Bulls, The Last Dance.

When the discussion turned to Michael Jordan, Eminem reminded his manager Paul Rosenberg of the time he was working on a shoe collaboration with His Airness.

“I don’t know Paul, if you remember this,” recalled Eminem. “We were talking about doing some kind of shoe together… I was on the phone with him and everything was cool, he’s super cool, and everything was good until we get to the end of the phone call and I said, ‘Yo man, when are you gonna come to Detroit so I can dunk on you.’ And it was crickets.”

“I don’t remember exactly what he said, but I think he just kinda like… [chuckles]… laughed. And I remember getting off the phone going, ‘Oh my God, I think I might have just blew it.'”

Eminem said that he and Jordan have since worked together, but at the time he was “mortified.”

“Because to me in my head it was a total joke, right?” he explained. “It’s so ridiculous for me to think that I could dunk on Jordan, right? So in my head, it’s one of those things that you think is gonna be funnier in your head than when you actually say it. So I don’t know what happened after that.

“It was one of those things that in my head just it would be so ridculous, he has to know I am joking,” he continued. “But when I got off the phone, I remember thinking, ‘I don’t think he knew I was joking.’ Because you know, he’s very, you know, watching this documentary, he’s very competitive. So, it’s like… I don’t know, if he would have said, ‘When are we going to battle?’ [laughs] I don’t know what I would have said! I probably would have laughed the same way he did [laughs].”