Emmanuel Sanders Reached His $500,000 Bonus Against The Panthers And Knew It Right Away 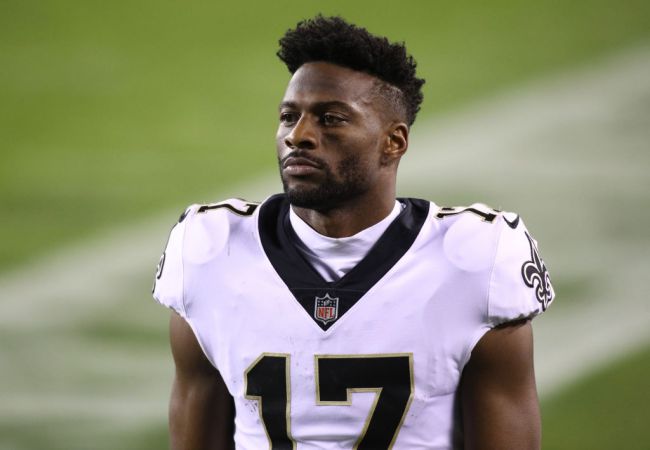 New Orleans signed wide receiver Emmanuel Sanders to a two-year, $16 million deal in March. The total contract is worth up to $19 million with incentives, one of which being a $500,000 bonus for recording 60 or more catches. He entered Sunday’s game against Carolina with 52 catches.

On 3rd-and-5 with 2:16 remaining in the third quarter, the 33-year-old ran a short eight-yard comeback route. Drew Brees looked his direction and hit him for the first down. It was his eighth catch of the afternoon, triggering the bonus. He threw up his hands as soon as he hauled in the reception and his teammate Marquez Callaway signaled with the money sign to the sky. Sanders, a half of a million dollars richer, made the same monetary gesture before lining up for the next play.

This was Emmanuel Sanders’ 60th catch of the season, guaranteeing him a $500,000 bonus. He knew 😂💰pic.twitter.com/SVLC4QXQSk

Sanders is in his 10th season in the NFL and finished the day with nine catches for 63 yards and a touchdown. New Orleans cruised to a 33-7 win over Carolina and clinched the No. 2 seed in the playoffs. Prior to signing with the Saints, the former SMU Mustang was drafted by the Steelers and played three years in Pittsburgh before spending five years in Denver. He spent a portion of the 2019 season with San Francisco before heading south.

The 2020-21 campaign marks the sixth time that Sanders has recorded more than 60 catches in a single season and the sixth time he eclipsed the 650-yard mark. His best season came in 2014, but his career has been hindered by multiple injuries along the way.