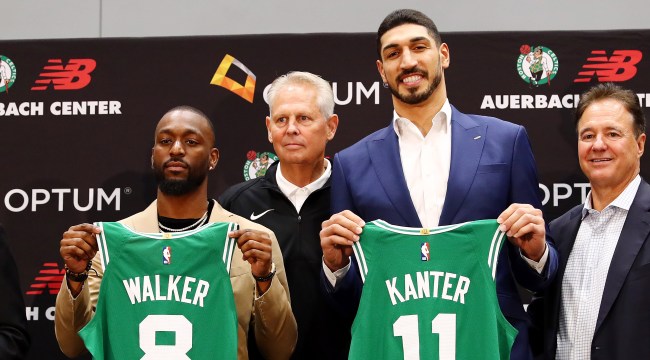 In December of 2018, Kanter, despite averaging 14 points and over 10 rebounds per game found himself relegated to the bench and eventually waived by the Knicks in February.

After being picked up by the Trail Blazers for the remainder of the season, Kanter signed a two-year, $10 million contract with the Knicks’ long-time rivals, the Boston Celtics.

Monday night, after being introduced to a smattering of boos while entering the ring during the WWE Raw event in his former NBA home, Madison Square Garden, Kanter was happily greeted by WWE 24/7 Champion R-Truth.

For those unfamiliar, the WWE 24/7 Championship can be defended any time, any place, 24 hours a day, 7 days a week as long as a WWE referee is present.

Kanter is not one of those unfamiliar with the title’s rules, which is why, after sharing a bro hug, he dropped Truth out of nowhere with a right hand and rolled him up to become the first pro athlete to win the WWE 24/7 Championship.

Then, just to stick it to the many Knicks fans in attendance at the Garden, Kanter unzipped his jacket to reveal his Kelly green Celtic jersey.

Unfortunately for Kanter, his reign was short-lived – about 22 seconds to be exact – as Truth recovered and rolled Kanter up to regain his belt and begin his 15th reign as WWE 24/7 Champion.

Despite the short title reign, after the match the 27-year-old Kanter said he would be back.

So, how long will it be until we get to see a Gronk vs. Kanter match inside a WWE ring?