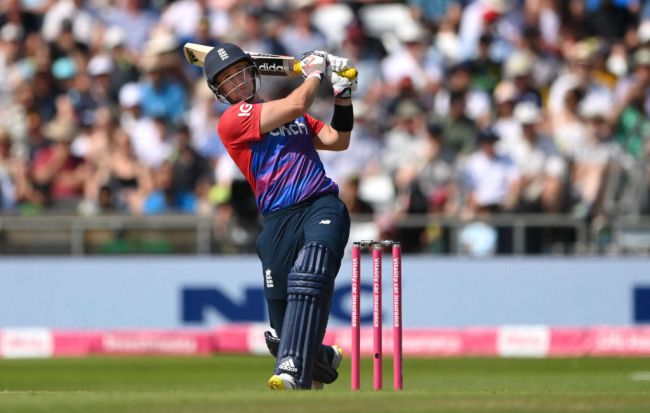 England cricketer Liam Livingstone hit a ball on Sunday that still has not landed on Monday. The 27-year-old Lancashire Lightning star sent a colossal shot beyond the boundary, beyond the fans, and beyond the stadium itself.

He crushed one out of the park, literally.

Biggest six ever?! 😱 @LeedsRhinos, can we have our ball back? 😉

Livingstone’s massive knock came during the English national team’s match. Pakistan quick Haris Rauf was the bowler on the unfortunate end of the six.

The ball cleared a three-tier grandstand and landed (allegedly, because it’s probably still in orbit) on the rugby pitch next door.

Rauf’s deliver landed in ‘the slot’— which allows batsmen like Livingstone to hit the ball for a six, which is when the ball lands beyond the boundary for six runs.

While it wasn’t a great delivery, Livingstone got every inch and sent it out for what many are calling the “biggest six of all-time.”

Livingstone was a big part in England’s crushing victory. He sent Rauf’s offering out of the stadium not just the once, but twice.

Earlier in the match, he took a huge swing and hit the ball beyond the stands, to the right of where he would hit one later in the afternoon. The crowd went wild.

OUT OF THE GROUND! 🏟

England went on to post a total of 200 all out and the hosts won the second T20 match against Pakistan by 45 runs. The highlight, of course, was Livingstone’s moonshot.