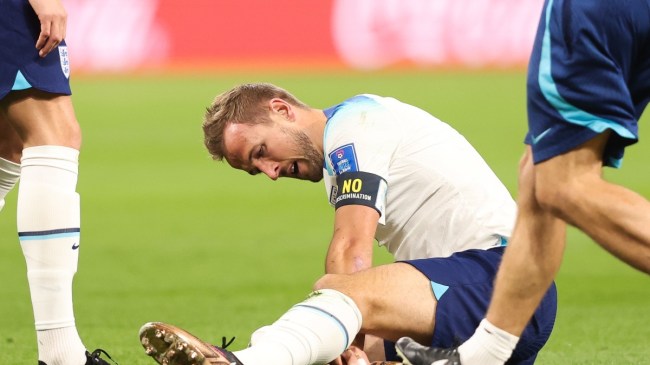 England opened up their 2022 FIFA World Cup in a resounding fashion. They dominated Iran 6-2, in a match that seemingly could’ve been 10-0. The attack flourished, as players like Raheem Sterling, Bukayo Saka and Jude Bellingham caused problems. They were able to do that due to the attention the Iranians had to put on star England forward Harry Kane. Kane, regarded as one of the world’s best center forwards, stars for Tottenham and has 51 goals in 76 appearances for England. His ability to hold up play, pass, and finish effectively unlocks much of the Three Lions’ attack.

And, he would be a massive focus of preparation for the United States heading into the much-anticipated match against the England side on Friday. But, the USA may not have to deal with him.

Kane’s status is in doubt as England Await Test Results

Harry Kane picked up an ankle injury against Iran when it was stepped on. He stayed in the match for a while before being subbed off.

And, now he needs imaging to see if there is anything wrong.

BREAKING: England Captain Harry Kane is undergoing a scan on his ankle injury picked up during England 6-2 win over Iran 🏴󠁧󠁢󠁥󠁮󠁧󠁿 pic.twitter.com/dj4Ky7J1xJ

This is bad news for England, and it goes further than just the United States match. If he is out for an extended period of time, it may be a death-knell for their chances.

For anyone confused, England cannot win the World Cup with Callum Wilson upfront instead of Harry Kane.

It would be huge news for the USA if he couldn’t play. The Stars and Stripes desperately need a point after tying Wales, 1-1.