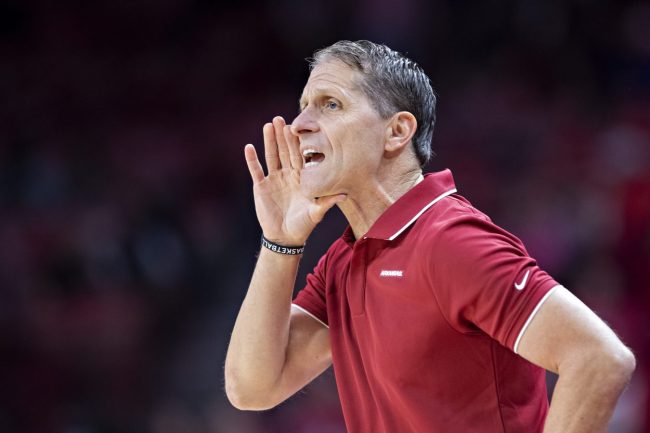 Arkansas head basketball coach Eric Musselman had a big Saturday. First, his Razorbacks took down West Virginia in dominant fashion on their home floor and then he got to kick it backstage at a Ludacris concert.

But he almost didn’t get the chance.

On Saturday afternoon, after winning his matchup in the SEC/Big-12 Challenge, Musselman sat down to address the media. He is currently rehabbing a shoulder injury, so he was all iced up (literally) and brought a unique sign to the table.

Ludacris, the rapper, was playing at JJ’s Live, a concert venue in Fayetteville later that night. Musselman had purchased box tickets, but as he explained, he did not have them anymore.

His wife gave them all away.

Musselman is a big Luda fan and didn’t want to miss out on the concert. The sign stayed next to him throughout his entire media appearance.

Has to be ‘My chick bad’ @DanyelleSargent 😎

After his public plea, one of two things happened. Either his wife saw him call her out and kicked someone out of her box.

Had to after @DanyelleSargent gave away my @Ludacris ticket 😂

OR, what is most likely, JJ’s Live bent the rules for Arkansas’ head basketball coach and got him in anyway. Based on a twitter interaction between the two, it seems to be the latter. JJ’s made sure to get Musselman in the building.

And that’s exactly what happened. Musselman got to hang out in the box with his wife and her friends. It was a successful plea.

Made it in! Couldn’t miss @Ludacris! pic.twitter.com/3gcREC7M3y

To cap the night, Musselman and his wife Danyelle got to meet Luda himself.

It all worked out in the end, but the fact that Musselman pulled up to his press conference with a sign asking for tickets to see Ludacris and then hilariously put his wife on blast is why he is the best. Very few people, particularly within the head coaching space, have more fun than Musselman.

And to make things even better, during his press conference, he took the time to thank one of the media members who was serving her last day on the Arkansas beat. It was unprompted and totally awesome.

So grateful I’ve had the opportunity to work with all the incredible coaches at Arkansas. And I want to publicly thank @EricPMusselman for this moment. It truly meant a lot to me. pic.twitter.com/sTffOnQldT