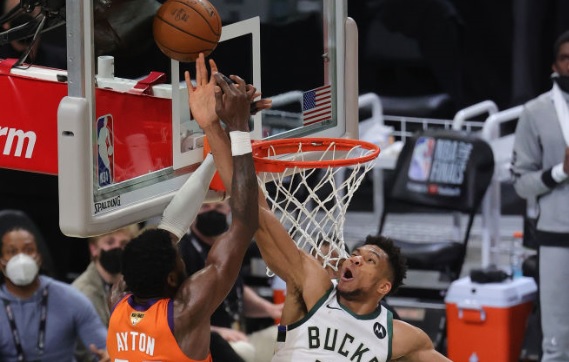 Milwaukee Bucks star Giannis Antetokounmpo delivered one of the best blocks in NBA finals history on Wednesday night and he may have made ESPN/ABC a ton of money in the process.

With a little over a minute left to go in game 4 of the NBA finals, Giannis made a clutch block on DeAndre Ayton that helped the Bucks tie up the series.

This photo of Giannis' block 🖼 pic.twitter.com/uyHxx6cWTk

According to Sportico’s Anthony Crupi, ESPN/ABC will likely net $250 million during the NBA Finals in ad sales now that the series is guaranteed to go six games thanks to Giannis’ block.

The Bucks just turned the NBA Finals narrative on its ear. Now it's a best-of-three-game series, ABC's guaranteed to rake in at least $250M in ad sales revenue—of course, that's before ADUs are factored in—and from here on out, the ratings will creep up in the 14M-16M range.

“According to Standard Media Index data, ABC booked $250.7 million in ad sales during the Raptors-Warriors sextet in 2019, a benchmark that appears to be within reach this time around. The cost of 30 seconds of in-game airtime is up near $600,000 a pop at the high end, and given the inevitable rate increases that accompany the higher ratings of a sixth game, the network is now playing with house money.”