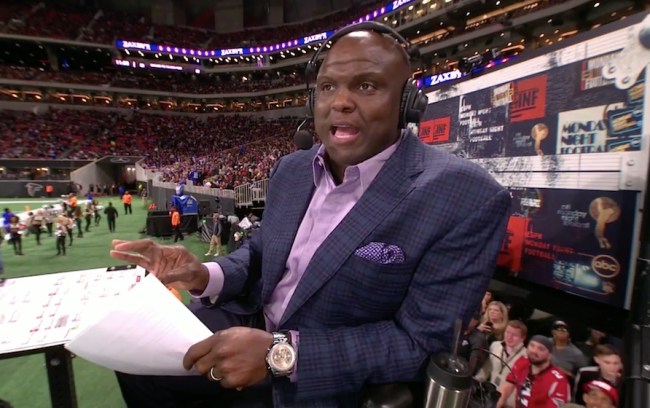 ESPN could be looking to reboot their ‘Monday Night Football” broadcast booth once again.

According to a report by the NY Post’s Andrew Marchand, ESPN is may be removing Booger McFarland And Joe Tessitore ‘MNF’ broadcast despite the fact that ratings are up this season.

With ESPN already starting the process of potentially another major shakeup on “Monday Night Football,” CBS’ Tony Romo is now even better positioned to eclipse John Madden’s game analyst record of $8 million per year in the free-agent market.

And he may blow that number away.

With or without Romo, there will be offseason uncertainty in regards to the Monday night booth of Joe Tessitore and Booger McFarland.

While ESPN’s “Monday Night Football” ratings were up this season, the telecast still lacks the same big-time feel of the other top broadcast booths.

Tessitore’s hype-filled style is best suited to college football and boxing, while McFarland’s first game as a lone analyst in a booth was this year on “Monday Night Football,” which might be the most scrutinized broadcast in sports.

Marchand believes ESPN/ABC could offer Romo over $10 million to take over the ‘Monday Night Football’ booth.

Meanwhile, ESPN/ABC hope to add a Super Bowl in the upcoming round of new NFL TV deals, and having Romo as its lead analyst is viewed as helpful. The money ESPN might offer could get crazy, with six years and $10 million-plus per year seemingly possible.

CBS remains the favorite to retain Romo, but it has barely any leverage and will be forced to pay a number its executives found unimaginable a year ago. Romo is making a little more than $3 million this year in the final season of what is essentially his rookie broadcast deal.

It’s pretty clear that McFarland has to go especially after he suggested the Bills spike the ball on 4th down late during last weekend’s playoff game.

on 3RD AND 10, booger mcfarland suggests the bills run a quick draw and then SPIKE THE BALL ON 4TH DOWN

you cannot make this stuff up pic.twitter.com/Y3lC7W03AH