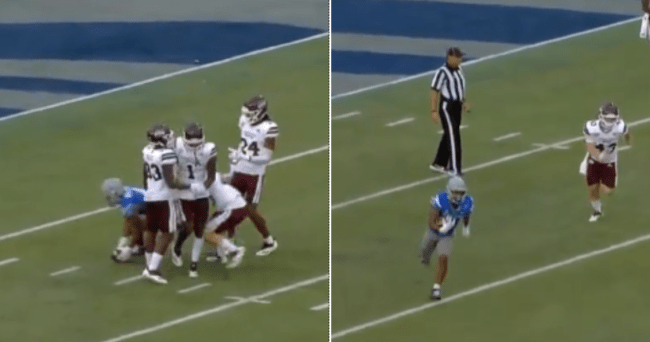 We had a bizarre situation go down in the Miss State-Memphis game on Saturday.

Late in the fourth quarter, Miss State appeared to down a punt return which was later picked up by a Memphis player who took it down the length of the field for a touchdown. Despite the fact that a ref appeared to throw a marker and wave his arms to signal that the play was dead, Memphis was awarded the touchdown.

Ladies and gentlemen stop what you’re doing. Memphis returned this ball for a touchdown. pic.twitter.com/47Jyg1AXSL

The ESPN commentator calling the game ripped the refs for appearing to call the play dead but allowing the Memphis TD to stand on video review.

“If I’m a Mississippi State fan I am upset. That is a play that should not have happened, watch the official he throws the marker down, watch as his hands go up as the play is over with, he’s calling the play dead and you can see the Miss State players there, they all stopped…that’s something that should be stopped and talked about but that official who comes in and I see that other official with the whistle in his mouth on the far side and the other official waving his arm that should not have counted”

Miss State went on to lose the game by two points which means the punt return/fumble TD made a huge difference in the game.

Update: Fans noticed that Memphis had two players on the field wearing #4 on their jerseys during the punt return TD play which should have been called a penalty.

Memphis had two players wearing #4 on the field at the same time during the controversial punt return TD, a miss by the refs. pic.twitter.com/guWRLtv2V4

1. The play shouldn’t have happened because two #4s were on the field

2. The play should have been called dead when the ball was downed and the ref marked the ball/called it with his arms.