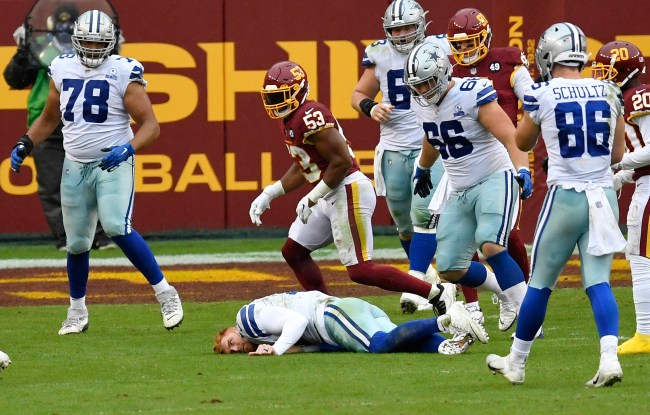 Cowboys players are beginning to take some flak over their response to Jon Bostic’s hit on Andy Dalton.

During Sunday’s Washington-Dallas game, Bostic was ejected for delivering a late helmet-to-helmet hit that knocked out the Cowboys QB from the game.

After the game, Cowboys head coach Mike McCarthy was disappointed his players didn’t get in Bostic’s face for the hit on Dalton.

Mike McCarthy on no Cowboys players getting in Jon Bostic's face after his dirty hit on Andy Dalton: "We speak all the time about playing for one another, protecting one another. It definitely was not the response you would expect."

Former NFL players Dan Orlovsky and Ryan Clark agreed with McCarthy’s criticism and blasted Dalton’s teammates for not fighting Bostic on the field.

.@danorlovsky7 and @realrclark25 went OFF on the Dallas Cowboys for not standing up for their quarterback.

"That's what losers do!" pic.twitter.com/ZxvQ8Cvoau

Dan Orlovsky: This was the most embarrassing moment for the Cowboys this season in a season filled with embarrassing moments. You can whoop me on the scoreboard because you’re better than me but you will not punk me. You will not punk my teammates. Do not tell me you have my back. Show me. Andy Dalton gets that hit and everybody just does nothing, like they should be attacking Jon Bostic, I would be coming off the sidelines as a backup quarterback if I saw my quarterback get hit like that.