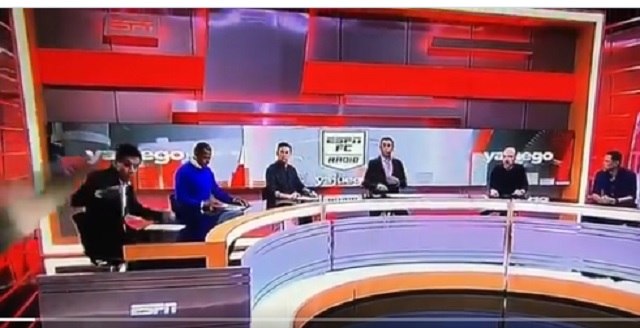 Colombian journalist Carlos Orduz was involved in a scary accident during the taping of ESPN FC on Tuesday night.

A video uploaded on Twitter shows a piece of the set coming loose and falling on top of Orduz in the middle of the live TV broadcast.

ESPN FC host Francisco Velez took to Twitter to give an update on Orduz’s condition following the incident.

We want to send you a piece of reassurance after the incident that occurred to us at the beginning of our program. Our colleague Carlos Orduz after the revision is fortunately in perfect condition. We appreciate the messages, the solidarity, the support of colleagues and the public in general. We hope to be with you again soon ”.

Update: Orduz went on to post a video of himself to say that he was ok and did not sustain any injuries.

This is Carlos Orduz of @ESPN radio 🇨🇴 telling everyone he is fine after an incident In studio tonight. You can pull up video.. it’s graphic, and it’s truly amazing he is standing upright and telling us he’s fine. 🙏🏼 https://t.co/SMPf0htKtw