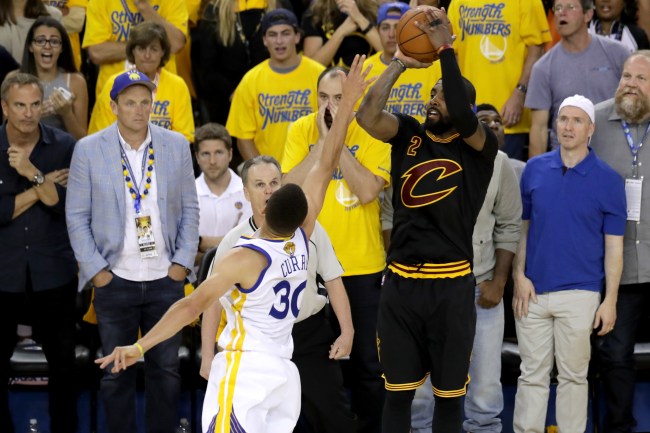 With no sports on the horizon due to the health crisis in the country, ESPN made the decision to re-air the classic 2016 finals between the Cavs and the Warriors.

During the over-the-air cable broadcast, ESPN cut to commercial and skipped Kyrie Irving’s iconic game-winning 3 pointer over Steph Curry which pissed off fans who tuned in and relive the Cavs championship. It does seem like those who streamed on the app or youtube.tv were able to see that shot.

How does ESPN come back late from a timeout and miss the biggest 3 pointer in a taped game?

For many, ESPN skipped "The Shot" by Kyrie Irving and "The Stop" by Kevin Love in their re-air of the 2016 NBA FInals Game 7. What's up with that? Photo: The Plain Dealer pic.twitter.com/Nl7Bin88Ww

Watching this entire Cavs Game 7 on ESPN right now and somehow @Uverse decides to air a commercial that runs long and cuts off “the shot!”

Are you kidding me? Waited all game to see Kyrie hit that thing! Now I’ll never know if he makes it!!! 🤣🤣🤣

The greatest shot of the last decade of the NBA and @espn skipped it cuz of a commercial smh! Played the whole game but THE GREATEST SHOT EVER!! come on man smh….

ESPN really just skipped over Kyrie Irving’s go-ahead 3 pointer with commercials while replaying the 2016 Game 7 in the Finals & people on Twitter are not happy pic.twitter.com/U6UAnE4Nbp

ESPN when they skipped Kyries go ahead shot pic.twitter.com/kRNhXXMCaM