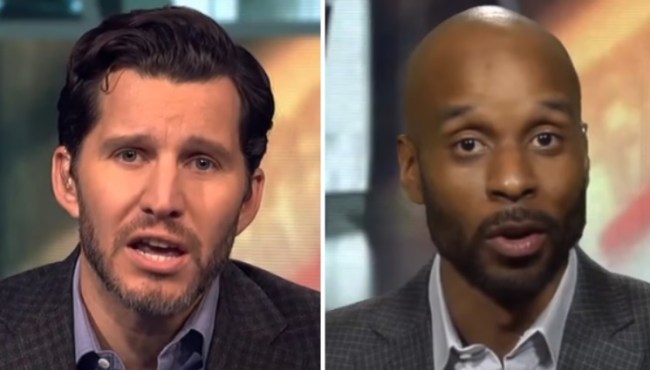 Bomani Jones went on The Will Cain Show on ESPN Radio to talk about the Bubba Wallace noose incident and things got a bit heated.

Today, was Cain’s final day a ESPN before he leaves for Fox News and Jones called into his show after watching Cain say Wallace was hurting race relations in America earlier in the day on First Take.

"I cannot give NASCAR any credit. I think NASCAR deserves a massive indictment."@willcain believes NASCAR and the media reacted too quickly to reports of a noose found in Bubba Wallace’s garage stall. pic.twitter.com/iQ0O8RDMKo

i'm gonna break a rule i imposed upon myself and do a little radio with @willcain at 5:15. i got a question for him. https://t.co/QSKhaEb4lJ

The two got into a 13-minute contentious debate about Bubba Wallace and race relations in the United States. During the debate, Jones felt he was angrier about the Confederate flag that flew over Talladega on Sunday than the noose situation that went down later in the day. Jones went on to commend NASCAR for looking into the noose incident because white people shouldn’t have gotten the benefit of the doubt that’s “not supported by the historical record.”

“White folks gotta live with the fact that you’re asking for a benefit of the doubt that is not supported by the historical record.” — @bomani_jones pic.twitter.com/IiuegqPzi4

You can listen to the entire debate below.