ESPN’s Stephen A. Smith Looked Absolutely Horrified When Jerry Jones Made A Comment About How He’s Always Surrounded By Pretty Women 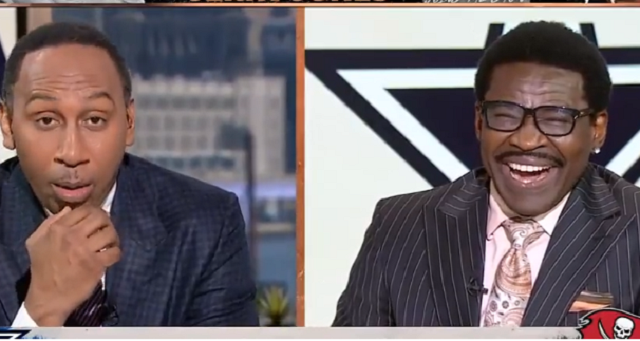 Stephen A Smith was caught off guard by a comment made by Cowboys owner Jerry Jones during the latest episode of ESPN’s First Take.

On Monday, retired Cowboys WR Michael Irvin made his debut as the show’s new co-host and discussed the current state of the Dallas Cowboys which led to a heated debate.

First Take with Stephen A Smith and Michael Irvin is performance art. pic.twitter.com/otxO4dlShu

Later in the show, Irvin invited Jones on the show to participate in the debate. Before signing off, Jones made an off-the-cuff remark about Stephen A. always being surrounded by pretty women which left the First Take host startled.

Jerry Jones "The reason I smile when I think of Stephen A, there's always pretty women around him…I like to hang with him around places" pic.twitter.com/27RkPVcocT

Fans of the show had some hilarious thoughts on Stephen A’s reaction to Jones’ comment.

Jerry Jones gonna say "the reason I smile when I think of Stephen A. there's always pretty women around him, I like to hang with him." You can see Stephens mind working HARD to change the subject 😭😭😭😂😂😂

Jerry Jones coming in for the destruction of Stephan A’s marriage! https://t.co/RV97Phr7nn

That reaction said a lot… https://t.co/bccVELQgYr

stephen a special lady is watching at home 😭😂