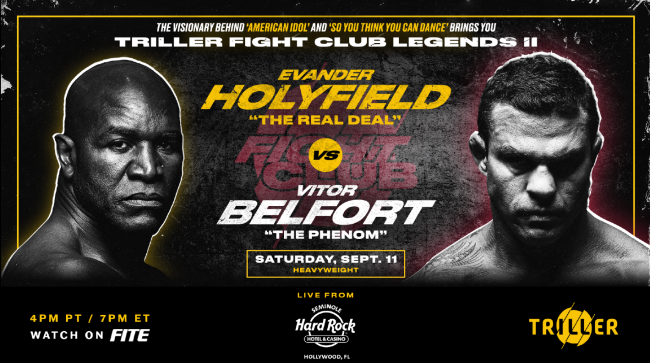 Triller had a bit of bad luck this week with Covid but they’re moving quickly to save their latest fight card.

On Friday, a week before his scheduled bout against Vitor Belfort, Oscar De La Hoya was removed from the card after catching Covid.

Wanted you to hear directly from me that despite being fully vaccinated, I have contracted Covid and am not going to be able to fight next weekend. Preparing for this comeback has been everything to me over the last months, & I want to thank everyone for their tremendous support. pic.twitter.com/0wKEnr5Jzv

Triller immediately called up 58=year-old Evander Holyfield who signed a deal to replace De La Hoya. Holyfield was denied a fight license by the California State Athletic Commission, and the fight card which was originally set to take place in Los Angeles will now be held at the Seminole Hard Rock Casino in Hollywood, Florida.

Per @RyanKavanaugh Evander @Holyfield has now signed his contract and at 58, will fight @vitorbelfort a week from today in the main event of a @Triller Fight Club show in Seminole, Florida

Triller released the first trailer for the Holyfield-Belfort fight which has been dubbed “Legends 2.”

The Evander Holyfield-Vitor Belfort fight will air on Fite TV/ Triller PPV for $49.99 and will feature an undercard fight between MMA legends Anderson Silva and Tito Ortiz.