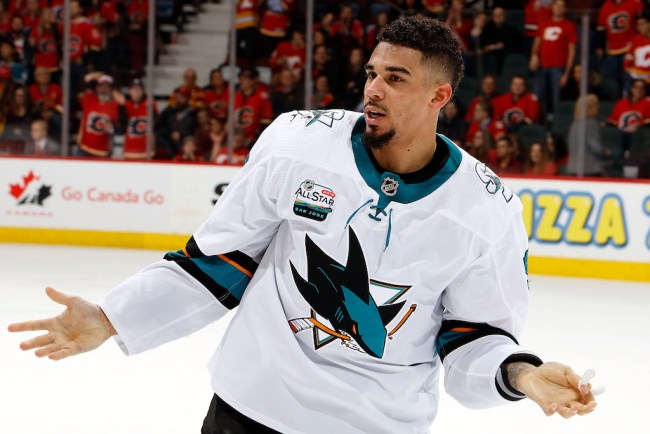 As a Boston Bruins fan, I fully acknowledge I’m not really in a place to criticize other players for being insufferable pests based on the amount of entertainment Brad Marchand’s various shenanigans have brought me over the years. With that said, if you’re one of the many fans who despise his antics, then you should have a pretty good idea about how I feel about Evander Kane.

Marchand has an uncanny ability to get under people’s skin but he’s also a damn good player. However, the same can’t really be said for Kane. Sure, he’s managed to stick around in the NHL for over a decade, but during that span, he’s earned a reputation as a bit of a shithead both on and off the ice and there aren’t many things capable of lifting my spirits than watching Zdeno Chara use his head as a punching bag a couple of years ago.

Kane has been suspended a number of times over the course of his career and has also found himself in legal trouble on multiple occasions. In 2016, a woman sued him for assaulting her before he was accused of trying to fight a bouncer at a bar in Buffalo a month later, and in 2019, he found himself at the receiving end of another lawsuit after allegedly failing to pay back the $500,000 he was spotted while gambling at The Cosmopolitan while in Las Vegas for a playoff series.

It turns out that was just the tip of the iceberg, as The Athletic reports Kane has found himself dealing with the court system yet again after filing for Chapter 7 bankruptcy in California, where he revealed he currently owes 47 different parties a collective $26.8 million in unpaid debt (compared to the comparatively paltry $10.2 million in assets he says he has). It’s unclear exactly what the hell he’s done with the approximately $53 million he’s earned during his time in the NHL, but based on the documents that were uncovered, at least $1.5 million of it was gambled away over the past year.

You really, truly hate to see it.