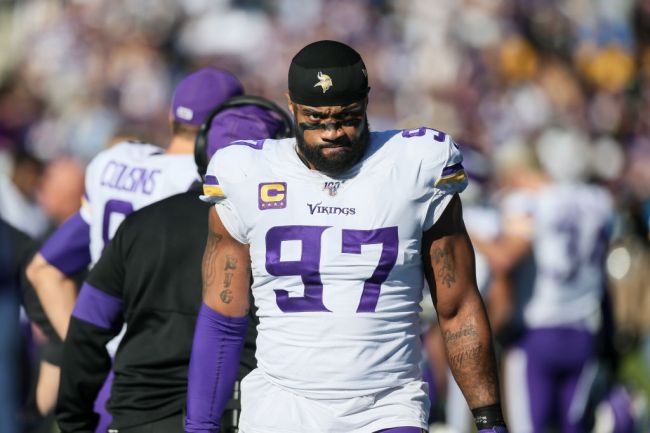 Everson Griffen is being forced to kiss some ass after showing his. The Minnesota Vikings announced on Monday that they are signing the 33-year-old defensive end, who played for the organization from 2010 through 2019.

The #Vikings have signed DE @EversonGriffen!

That might make things tense in the locker room.

He even doubled-down, denying that he was hacked in a tweet that is still up.

Griffin did not have any plans on re-joining Minnesota at the time.

One final note on this: Everson Griffen does want to return to the Vikings, per a source. He’s training in hopes of signing a deal. Free agency opens in March. We’ll see if the Vikings have interest in him.

Well, now he’s back. And Kirk Cousins is his quarterback. Awkward.

Griffen apologized for his tweets shortly after they caused quite a commotion. The apology that was specifically directed toward Cousins has also been deleted.

“I’m sorry for posting that about Kirk. It’s not right for me to call people out. I apologize for hurting him. I’m very grateful and thankful.”

@vikings I’m sorry for saying anything negative. I love this organization. Vikings will always have a place in my heart. If you want it, go get it. All love for for real.

Despite the informal apology, Griffen wants to make things right in person now that he’s back in the Vikings organization.

Griffen, who spent the first 10 years of his career with Minnesota, signed a one-year deal with Dallas last season before being traded to Detroit. He will return to the Land of 10,000 Lakes with an apology in order.