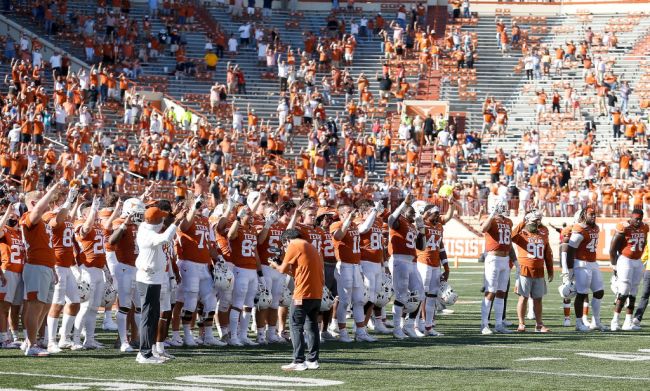 A University of Texas committee says that ‘The Eyes of Texas’ was not written with racist intent. However, the committee, formed in November to investigate the history of the school song, does acknowledge that its first public performance was likely by blackface performers during a minstrel show.

The song borrows the melody of “I’ve Been Working on the Railroad,” which was originally written to insult black railroad and levee workers, and has been the subject of a significant debate over the past year. Written in 1903, it is traditionally played before and after every University of Texas sporting event, and all student-athletes have been required to gather for the performance. A long list of current student-athletes have requested that the song, and the requirement to remain on the field for its performance, be removed in efforts to make the school more inclusive.

While the lyrics themselves may not present overt racism, the song is said to carry racial undertones that can be traced back to its beginning. The “eyes of Texas are upon you” is a lyric of satire that was made popular on campus by former university president William Lambdin Prather and is rooted in Confederate general Robert E. Lee’s famous line “the eyes of the South are upon you.” As the report mentioned, it was first performed as a satirical song at minstrel shows, a comedic variety show that features white performers in blackface.

Amid the racial injustice protests and social movements over the past year, college athletes began to really discover the power of their voices and used them to project their message. Texas football players were among the most prominent sports figures to join demonstrations after the death of George Floyd and first marched with head coach Tom Herman from campus to the state Capitol. They then led a group of students and athletes in demanding the school drop the song and rename a few of the buildings on campus.

The Texas football team has reached the Capitol.

Letters poured in from students, donors, and fans wanting to keep the song, urging thoughtful consideration and dismissing the demand from “agitators” and “whiners who just want to create trouble.” In response, Texas officials kept the song but did not require athletes to sing it.

However, the issue flared up again when the football team did not stay on the field for the song after its first two home games and was amplified after the players again left the sideline after the annual Texas-Oklahoma game in Dallas.

Breaking | Sam Ehlinger is the only Texas player to stay for the singing of "the Eyes of Texas" post game. pic.twitter.com/RFlHUQGa4W

Senior quarterback Sam Ehlinger was the only player left on the field after the Longhorns’ four-overtime loss, but he explained that it was not a deliberate statement.

Sam Ehlinger calls this picture of him standing alone for The Eyes of Texas “a little bit of a misunderstanding.”

Says he stayed on the field much longer than normal talking to Oklahoma coaches and players, and added that Ta’Quon Graham was there waiting for him in the tunnel. pic.twitter.com/B61mhEQLSA

As for why Ehlinger chose to acknowledge the song, he clarified after the game.

“That perspective is that I grew up a Longhorn. I grew up singing ‘The Eyes of Texas’ win, lose or draw. I shared that experience with my family. I shared that experience with my (late) dad, and never once singing that song has anything negative ever crossed my mind,” he said. “It was always about paying respect to the university and the incredible tradition that the University of Texas has.”

“I also feel a connection with my family and my dad singing that song because I grew up doing that. That’s why it’s important to me. All of my guys and all of my teammates understand that and they know my perspective.”

Recent reports have surfaced that the university officials, Herman and athletic director Chris Del Conte ordered the team to stay on the field while ‘The Eyes of Texas’ played to appease angry donors. The meeting was held after the Oklahoma game.

My teammates and I got threatened by some alumni that we would have to find jobs outside of Texas if we didn’t participate. https://t.co/owWwHF50ri

DeMarvion Overshown and another unnamed player on the 2020 team went so far as to tell the Texas Tribune that they were told that not participating in the postgame festivities may alter future job prospects.

“They said y’all don’t have to sing it. But y’all have to stay on the field. Y’all have to go over there and at least show fans appreciation for coming out and watching you guys play,” Overshown said. “It was really eye opening. These are some high-power people that come to see you play and they can keep you from getting a job in the state of Texas. It was shocking that they said that. To this day I still think back to the moment. They really used that as a threat to get us to try to do what they wanted us to do.”

Del Conte denied the reports and said that he is “happy” to talk to anyone to let them know that “this is not true.” Herman has not released a statement.

In addition to the player statements, the paper published emails that showed donors and alumni threatening to rescind their contributions to the athletic department and the university of the players did not acknowledge the song. Texas president Jay Hartzell released a statement regarding the emails that defended players.

“People who target our students with hateful views do not represent the values of the Longhorn community,” the statement read. “A few extremist views in the sample of emails the Texas Tribune reported on do not speak for the 540,000 proud Longhorn alumni who actively support our students and university. Out of the many emails I received this fall, a very small number included comments that were truly abhorrent and hateful. I categorically reject them, and they bear no influence on any aspect of our decision-making.”

“The fact that we don’t all agree on our school song doesn’t mean that we don’t all belong. Next week, the Eyes of Texas History Committee will release its report. Equipped with a common set of facts, we will then continue the conversation about our song. Having spoken to students and faculty on the committee, I truly believe we can be a model for how communities address complex problems and move forward together.”

The 58-page report has since been finalized on Tuesday morning and recommended that students should not be required to sing the song.

“These historical facts add complexity and richness to the story of a song that debuted in a racist setting, exceedingly common for the time, but, as the preponderance of research showed, had no racist intent,” the report states in its executive summary. “‘The Eyes of Texas’ should not only unite us, but hold all of us accountable to our institution’s core values.”

Other findings of note in the report include:

During an interview on the Longhorn Network on Tuesday morning, Hartzell said that he hopes the committee’s report provides the first thorough understanding of the history of the song.

“The hope is that everybody will use this report as an opportunity to come forward with the same fact base and be able to have more conversations, certainly including with our student-athletes,” Hartzell said.

When asked if the song had racial undertones, he said that, for him, it does not.

“But it certainly was present at different times where those undertones existed,” he added. “You go back to thinking about its first performance in 1903 at a minstrel show. I mean, you cannot deny that that performance has the racial undertones, and overtones, if you will. Hateful things. But on the other hand, if you look at the way, to me, the song was composed, written and designed. … It was not designed for that.”

The committee was chaired by the school’s professor and associate dean for equity, community engagement and outreach in the College of Education at Texas Richard Reddick, featured 24 members, including students, alumni, historians, administrators, professors, and both current and former members of the Longhorn band.

“There’s no smoking gun,” Reddick said on the Longhorn Network. “There’s nothing that either vindicates or implicates ‘The Eyes of Texas.’ It is an artifact of the university. It is a part of our history, the history of The University of Texas, Texas, the South, the postbellum Jim Crow South. So all those things are in there.”

Reddick said that the hardest part of the committee’s research and report is that there will not be one singular, final resolution.