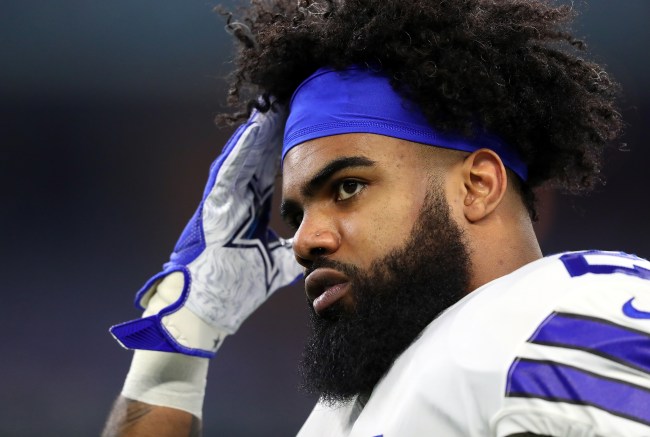 Ezekiel Elliott isn’t happy that he was outed for testing positive for coronavirus.

On Monday afternoon it was revealed that Elliott was one of the Cowboys players who tested positive for being infected with Covid-19.

Several #Cowboys players & several #Texans players have tested positive for COVID-19 recently, sources tell me & @TomPelissero. None of the players are believed to have been in their team facilities. The teams followed proper health protocols.

Per source, Cowboys running back Ezekiel Elliott was tested for Covid-19 last week and came back positive. Source confirms positive test for Elliott.

#Cowboys star RB Ezekiel Elliott is one of the players who has tested positive for the Coronavirus, his agent Rocky Arceneaux confirmed to me. Arceneaux said Elliott is feeling good.

An angry Elliott took to the Internet to say that he didn’t approve of the leak and that his agent only confirmed that positive test result when asked by reporters.

My agent didn’t break the story to the media

My agent only confirmed. The story was already written. Reporters had been called my agent all morning.

Zeke’s accusation could be serious if he can prove a healthcare professional leaked his information to the media.

While a journalist doesn't violate HIPAA by reporting on an athlete or celebrity testing positive for COVID-19, if a person in the health care system shared the info with the journalist–and did so without patient consent–that person & his/her employer could face repercussions. https://t.co/WUSfZVBJz5