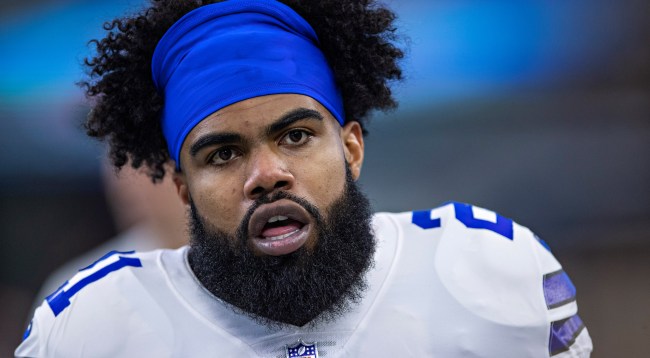 Cowboys running back Ezekiel Elliott has some legal trouble on his hands as he is reportedly being sued after his dogs allegedly attacked a woman that was cleaning his pool this spring.

According to TMZ, the woman was reportedly “ambushed” by his three dogs. Poer the court documents, the woman claims that Elliott’s Rottweiler first bit her arm and dragger and his two bulldogs then began to attack her legs.

The alleged victim said she went straight to the emergency room following the incident while claiming that the injuries were so bad that she underwent surgery two weeks later to repair the damage done to her forearm. The lawsuit states she’s still having issues with the arm and that she “constantly suffers from mental and physical pain over the attack.”

She also alleges that this isn’t the first time Zeke’s dogs have attacked someone claiming that the Rottweiler bit someone else who worked for her company in 2019.

Elliott’s attorney Frank Salzano told TMZ that his client did nothing wrong. “Ezekiel was in no way negligent in connection with the alleged incident and intend to vigorously defend the lawsuit.” So, we can expect to hear more about this situation in the future.

Dak Prescott dealt with allegations that his dogs also attacked somebody back in early 2019.

Not sure what is going on with Cowboys, their dogs, and these alleged attacks, but it’s certainly something.