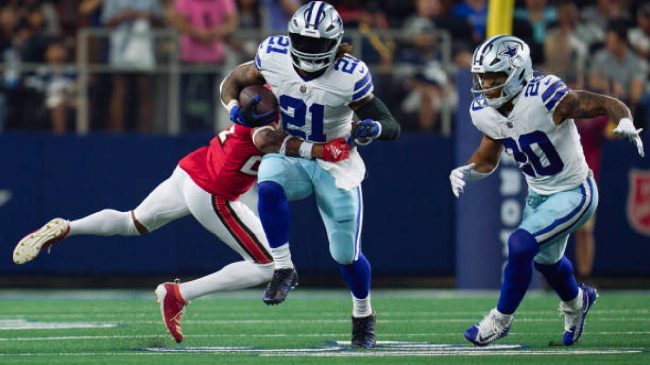 After suffering some major losses over the course of the NFL offseason, the Dallas Cowboys offense fell flat in Week 1 of the new season.

They were only to post 244 yards total yards over the course of the game and were held to just 3 points, making them the only team in the league that hasn’t scored a touchdown yet.

Following the disappointing Week 1 performance, it seems that star running back Ezekiel Elliott believes he know how to fix the Cowboys offense.

According to Elliott, the team needs to commit to running the ball to wear on the defense and his 10 runs on Sunday weren’t enough.

Cowboys RB Ezekiel Elliott, who had 10 carries for 52 yards on Sunday: “We just got to commit to it. We got to wear on the defense.”

Elliott said he doesn’t know what the number needs to be, but he definitely thinks they have to commit to running the ball. 10 runs is not enough

Elliott only received 10 carries over the course of the loss to the Bucs and Tony Pollard only got 6. Game script was obviously a part of the equation, as it was difficult for the Cowboys to commit to running the ball in a game where they trailed most of the way.

However, Zeke will most likely get his wish over the next few weeks. With Dak Prescott injured and Cooper Rush replacing him, the Cowboys should be expected to lean heavily on the running game until Dak returns.

The Cowboys will have to hope that the running game really is the answer to their offense’s problems, otherwise the team’s playoff hopes could be just about gone by the time Dak is able to return.