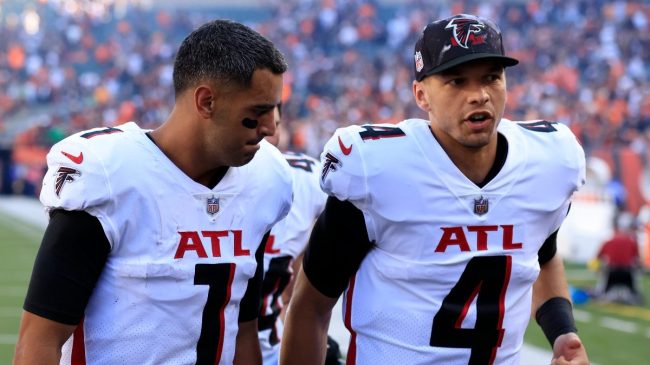 The Atlanta Falcons are currently on a two-game losing streak after playing poorly against the Carolina Panthers in Week 10. Marcus Mariota hasn’t looked great either and many are calling for rookie Desmond Ridder to get a shot. For that reason, head coach Arthur Smith addresses the rumored quarterback situation.

According to D. Orlando Ledbetter, the Falcons’ head coach is adamant that, “there is no situation.” Smith elongates by stating, “There was never a situation, ever. I don’t know where that…You understand why the question is getting asked. You lose two games in five days. Everybody wants to panic.”

#Falcons coach Arthur Smith on QB SITUATION: “There is no situation. There was never a situation, ever. I don’t know where that…You understand why the question is getting asked. You lose two games in five days. Everybody wants to panic.”

It also doesn’t help that Marcus Mariota looked completely lost on Thursday Night Football. On top of that, it’s not like the Falcons are true contenders this year. The only reason they’re in the playoff hunt is that the NFC South stinks.

Regardless, Arthur Smith doesn’t seem to have any plans of starting Ridder anytime soon. Which, to be fair also makes sense. Why throw a rookie to the wolves when you can spend the entire season developing him on the bench?

At the end of the day, the Falcons’ head coach may have to ponder a quarterback change down the road. Especially if the offense continues to look like a hot mess with Marcus Mariota under center. So, keep an eye on Atlanta, as calls for Desmond Ridder are not going to quiet down until the team starts winning again.