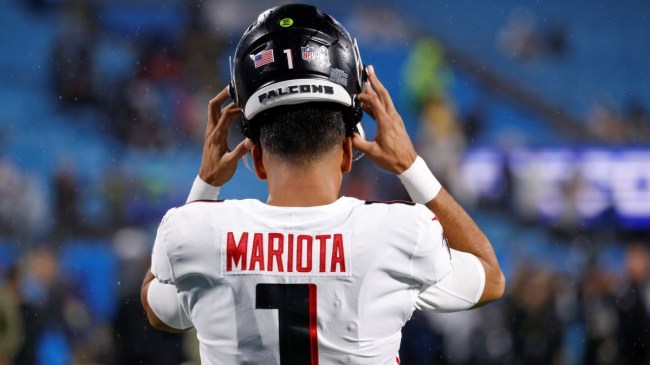 The Atlanta Falcons somehow walked into their Thursday Night Football showdown with the Carolina Panthers at 4-5, but with a chance to take sole possession of first place in the NFC South.

Their question to do so, however, did not get off to a great

start. Atlanta got pushed around on both sides of the ball and the Panthers took a 13-3 lead into the halftime break. Keep in mind, this is a Carolina team that is 2-7, has fired its head coach, and trailed the Cincinnati Bengals 35-0 at half just four days ago.

But that didn’t appear to mean a thing to the Falcons, who were downright putrid through the first 30 minutes. Much of their struggles fell at the feet of quarterback Marcus Mariota. Mariota, who was brought in to replace franchise legend Matt Ryan, went just 8-of-14 for 63 yards and an interception in the first half. And it could have been far worse. Mariota had two would-be interceptions dropped by Panthers defenders.

Amazon Thursday Night Football analyst Richard Sherman laid into the veteran QB at the half.

Mariota’s stat line gave a good indication of just how poor he was in the first half. But Sherman suggested Falcons coach Arthur Smith make the drastic move of benching his starting quarterback.

"At this point, you've gotta bring somebody else in. He's making rookie mistakes, and as a veteran, you can't have it. You have a good gameplan… you run the ball… you don't turn the ball over. This is carelessness." 🏈 #TNF pic.twitter.com/qyQxRNyXL7

“…Mariota’s making this too easy for them,” Sherman began. “…He’s just throwing it up for grabs. You look right here. He’s a veteran quarterback. He’s getting out of the pocket, take what you can get or just throw it out of bounds. But you(‘re) throwing it back to the heart of the defense into a double team…you just don’t do this. As a veteran, you don’t make these kinds of mistakes…at this point, you’ve gotta bring somebody else in.”

Mariota did find his footing a bit, leading the Falcons on a touchdown drive midway through the third quarter. But Atlanta will need more of the same if it wants to leave with a win and first place in the division