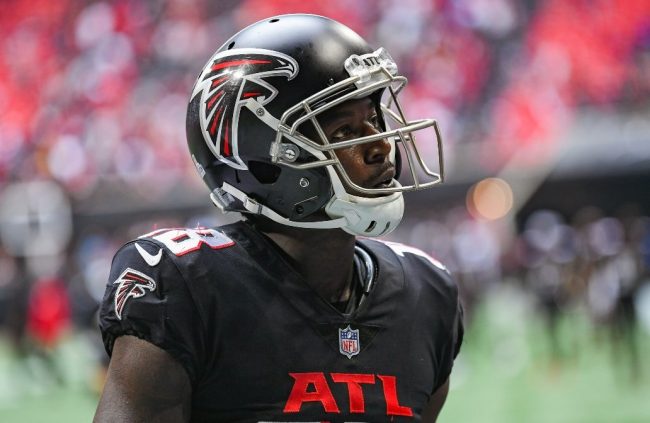 Calvin Ridley has hit quite the rough patch in his career lately. After sitting out most of the 2020 season due to personal reasons, the Atlanta Falcons star receiver was given a full year suspension for gambling on NFL games. Now, Ridley has become the victim of a targeted gang-related robbery, piling on what has been a difficult two years for the star wideout.

According to ESPN, many celebrities in the Atlanta area have been targeted based on what they share on social media. The crimes this gang commits include, “carjacking, kidnapping, armed robbery, shootings, [and] home invasions.” In their latest attack, they went after Falcons star receiver Calvin Ridley. He apparently has many pictures of him wearing expensive jewelry on Instagram.

These crimes have gotten so out of hand, that Fulton County District Attorney Fani Willis made a public announcement to those who live in Atlanta. “What they do is target people who show their wealth on social media. So I do have a message for the public: Where it is kind of fun to put your things on social media and show off, unfortunately, these gangs are becoming more savvy, more sophisticated in the way that they target you.”

They call themselves The Drug Rich gang. Hopefully, the Falcons’ star wide receiver is okay as it sounds like no physical harm was done to him. Calvin Ridley has yet to make a statement regarding the robbery.

Hopefully, things start to die down for Ridley, as his career has been quite the roller coaster lately. He’s due back to return to the field after the 2022 season. His future with the Falcons is yet to be determined. So we’ll see how that plays out once he returns. Keep your head up Calvin Ridley, we’re in your corner.