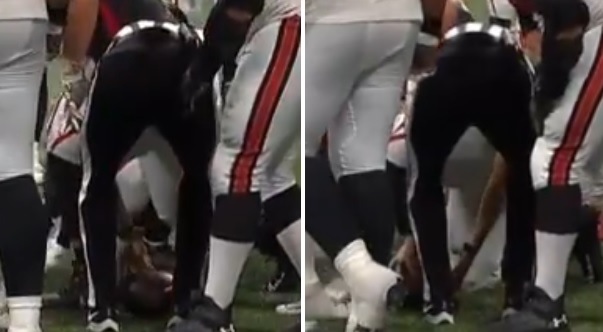 There was a bit of controversy at the end of the Bucs-Falcons game.

Late in the fourth quarter while up four points with about a minute left to go in the game, the Bucs ran the ball with Leonard Fournette on third down but appeared to be short for a first down.

A replay showed the ref curiously moving the ball forward for whatever reason after the initial spot.

Even the announcers sayin it, the ref moved the ball up and it was still short on the chains! pic.twitter.com/u76uO3wLQB

Despite the generous spot the crew measured the ball and still called it a first down even though it looked like the Bucs were clearly short.

this measurement resulted in a 1st down 😂😂
it was reviewed…and confirmed a 1st down pic.twitter.com/xya4eoUQwD

Falcons fans were irate and accused the refs of cheating.

The refs cheated the spot. They knew what they were doing. Even hansen on redzone showed a replay and said “look at the official sliding the ball” and they cheated the chains lol

Lol blatant cheating by refs in the Tampa vs Atlanta game @NFLOfficiating horrifying today. @NFL needs to fix this.

@AtlantaFalcons Fournettes run was not a 1st down, clearly shows that he was short & camera close-ups on the chains show he was short even with the generous spot, how could they not overturn that. To me that’s Blatant cheating by the refs, shouldn’t have blown the lead but still.

Lol. The @NFL still not hiding anything. The ref clearly moved the ball forward for the Bucs. Sheesh. https://t.co/VWYNk6Zykx

This wasn’t a first down at all. See there’s a gap and plus the refs moved the ball forward only to get the Bucs a win because brady paid them like he’s done in New England https://t.co/fipBZDyT6q