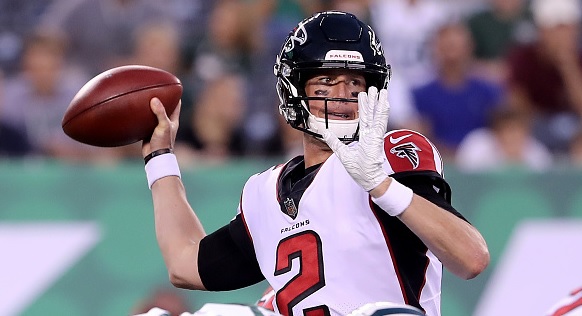 Yesterday, Jags cornerback Jalen Ramsey gave his unfiltered thoughts on several QBs from around the league in a highly controversial interview with GQ.

One of the highlights of the interview was when Ramsey went off on Falcons QB Matt Ryan, who he called a “complete bust” and “overrated”.

I think Matt Ryan’s overrated. You can’t tell me you win MVP two years ago, and then last year, you a complete bust, and you still got Julio Jones? There’s no way that should ever happen. I don’t care. You know what that tells me? That tells me [Offensive Coordinator Kyle] Shanahan left, went to San Francisco, got Garoppolo, made Garoppolo this big thing. And now Garoppolo is a big name—and now [Matt Ryan] has this bad year? Alright, well, was it really you, or was it your coach? He was doing what was asked of him and it was making him look really, really good.

This morning on the Dan Patrick show, Ryan was asked about his thoughts on Ramsey’s comments and here is what he had to say.

I’ve played for 11 years. And so, I’ve heard my fair share of trash talking from a lot of different people. If this stuff kept me up at night, I probably wouldn’t be doing what I’m doing. So, I don’t pay too much mind to it. I’m about winning games, and I’m about being the absolute best player that I can be. So, that’s kind of my thoughts on it.”

Despite Ramsey’s criticisms of Ryan the Falcons QB was ranked as second best QB in the league at the end of the 2017-2018 season according to Pro Football Focus.

The Jags and Falcons meet in the preseason on August 25th but it’s unclear whether Ryan and Ramsey will be both be playing that night.