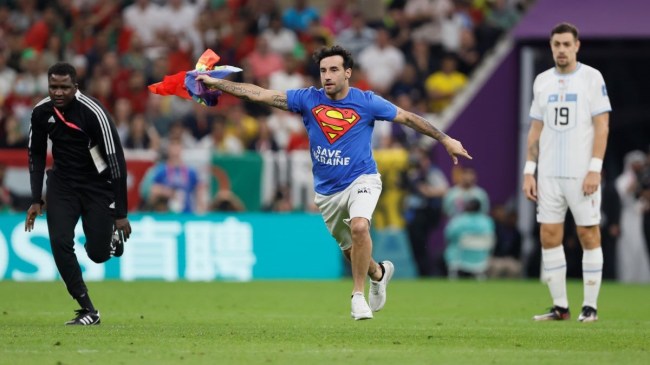 The 2022 FIFA World Cup has already had a number of memorable moments on the field before the knockout stage even begins. But the controversial tournament will likely always be remembered for what happens off the field.

That’s because the event is taking place in Qatar. The Middle Eastern state has been criticized for its abuses of migrant workers, women and the LGBTQ community.

The country, as well as FIFA, have already shown they’re willing to do anything and everything to avoid any protests of the event and the country. But one brave fan didn’t care about the consequences on Monday evening.

During the second half of Portugal’s 2-0 victory over Uruguay in Group H, a fan ran out from the stands. He wore a shirt that read “Save Ukraine” on the front and “Respect for Iranian Women” on the back while holding a rainbow flag in his hands.

In one moment, he managed to protest Russia, Qatar and Iran. TV cameras were quick to cut away from the fan on the field. But the act quickly made him a legend across the internet.

And yet many others shared their concern over what would happen to the man. The pitch invader was quickly detained and escorted off. The act, however, is just the latest in what is quickly becoming the most politically charged World Cup of all-time.