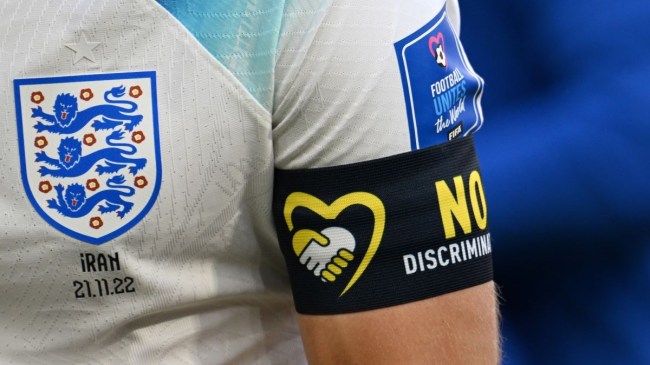 Instead, the 2022 edition was sold out to Qatar, which used migrant slave labor to build its stadiums while boasting an absolutely appalling record on human rights. While most of the focus has been on the country’s lack of beer sales, another main topic of contention has been Qatar’s mistreatment of members of the LGBTQ community.

To speak out about these human rights abuses, seven European nations were set to wear rainbow captain’s armbands during the tournament with the phrase OneLove written on them. While it’s a relatively small gesture, it’s apparently too much for Qatar and FIFA to handle.

Similar armbands have been worn in the past without issue, both for club and international games. But this time appears to be different. Because this time the games are in Qatar, and FIFA has no control.

FIFA has threatened to punish the nation with yellow cards to their captains for wearing the armbands, according to the Washington Post.

The countries issued a joint statement this morning explaining their decision to not wear the armbands.

The decision is reasonable. But you would have liked to see at least one team stand up in the face of FIFA’s cowardice. Amnesty International also issued a statement on the matter.

BREAKING: Amnesty International have responded to FIFA's threats to sanction players who planned to wear ‘One Love’ armbands to show support for the LGBTI community. pic.twitter.com/L3Y1DjcSRw

Though BBC Sport presenter Alex Scott, who played for the England women’s national team, did not back down.

FIFA may have banned England from wearing a Pride Armband on field at the World Cup, but English analyst Alex Scott is wearing it on the sideline as she broadcasts to the Nation. Positivity 1 Dystopia 0 🏴󠁧󠁢󠁥󠁮󠁧󠁿👑 pic.twitter.com/AUlLJ6gRjb

The decision yet again shows that the 2022 World Cup is not run by FIFA, but rather by the country of Qatar.