Video Shows Fan Running On The Court During Wizards-Sixers Game, Getting Tackled And Immediately Arrested 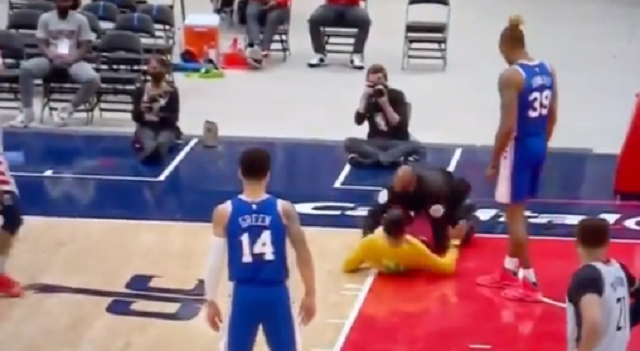 We have another fan incident at an NBA game.

Just a day after a fan was arrested for throwing a water bottle at Kyrie Irving, another fan was apprehended by security for trying to run on the court during the Wizards-Sixers game.

Fan on the floor in Washington – It's like a contest to see what fan can do the dumbest thing now pic.twitter.com/cKR8FfYrk1

An alternate angle shows the fan slapping the backboard while on the court before getting tackled by security.

The fan was immediately put in handcuffs and arrested.

Update: The fan has since been banned from the arena and will have charges filed against him

During this evening's game, a fan was apprehended by Capital One Arena Special Police after attempting to breach the court. He will be banned from the arena and charges are being pursued with DC MPD.