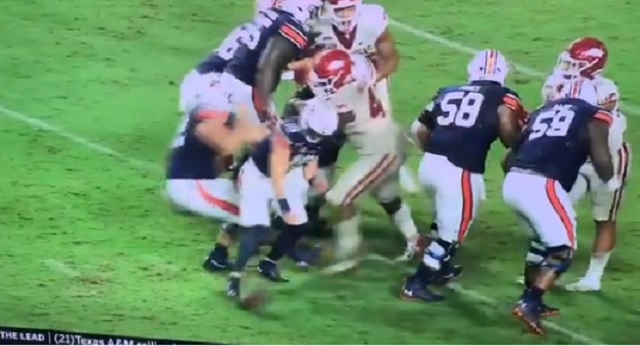 Refs appeared to cost Arkansas a win on Saturday afternoon.

At the end of the game Auburn quarterback Bo Nix went to spike the ball and stop the clock for a game-winning field goal attempt. Nix fumbled the snap, recovered, and then spiked it.

The officials called Nix for intentional grounding but it was pretty clear that Nix threw the ball backwards and the play should have been ruled a fumble with Arkansas recovering the ball.

This is 100% a fumble
Bo Nix spikes the ball backwards, behind him, whatever. It’s a backwards pass. pic.twitter.com/hoTOdVFTcz

Shouldn’t this be considered a fumble? He muffs the snap and then tries to clock it but throws backwards. That should be a fumble #Auburn #ARKvsAUB pic.twitter.com/vagbCNHraM

Fans were irate at the refs for blowing the call.

I don’t understand how that’s not a fumble for Auburn.
Someone who is a referee pls define that rule for me.

Wow. I mean, I’ve seen some bad officiating before. But that’s a total screw job.

If the SEC is going to screw a team over, they will always make sure it’s Arkansas.

That was a fumble by Bo Nix. Again Auburn gets bailed out