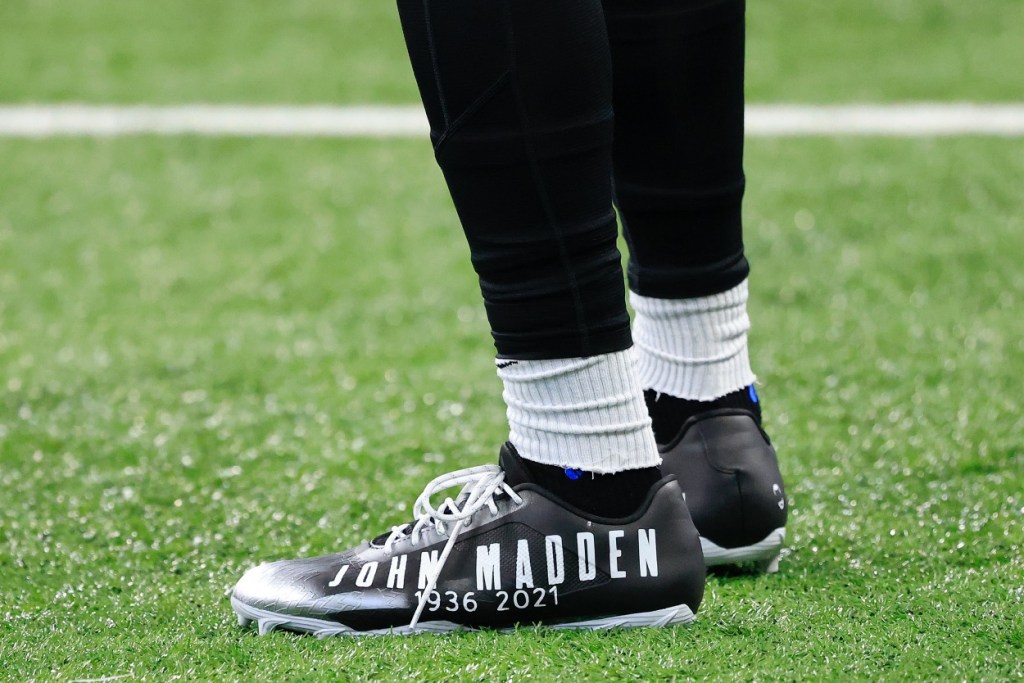 The NFL just can’t get out of its own way sometimes. On Sunday, Las Vegas Raiders wide receiver DeSean Jackson wore custom cleats as a tribute to the life and legacy of John Madden. The NFL then ordered DeSean Jackson to remove his custom Madden cleats before the game.

Rules regarding a player’s cleats are pretty straightforward and well known. NFL officials typically only allow players to wear custom cleats one week per season during their ‘My Cause, My Cleats’ initiative where players can wear custom cleats raising awareness for a charitable cause.

Other than ‘My Cause, My Cleats’, players typically have to stick to the uniform even when it makes the NFL look like monsters for not allowing a player to honor the life and legacy of John Madden. After he was ordered to remove his custom cleats, DeSean Jackson took to Instagram to share his message of “NFL hated on me and said if I didn’t take cleats off they was gonna remove me from the game! I had these made for the legendary John Madden.”

After DeSean Jackson posted about the NFL ordering him to remove the custom Madden tribute cleats people on social media were quick to express outrage at the No Fun League for failing to apply common sense. The implication here is he was told he would be removed from the game, not just fined. In the past, players have been fined for wearing cleats or watches without approval but being removed from the game is a different situation. He can’t let down his teammates like that.

From Desean Jackson’s story. NFL needs to chill with this, removing a player because they want to where cleats honoring one of if not the greatest coach in your history?

Just take a chill on cleats at least pic.twitter.com/cCna7EqdOL

For 4 decades the NFL hated Al Davis and my Raiders. All this love for Madden is basically bullshit!

Hey @richeisen can we get you calling out the league on this? It would go a long way. @DeSeanJackson10 was doing something nice here.

Meanwhile nobody said squat to Stefan Diggs who did the same thing.

Typical NFL they have a different set of rules for the #Raiders Im Sure DJAX would of paid the 5k to wear them like Alvin kamara on xmas.

DeSean Jackson had these made trying to honor the great John Madden. pic.twitter.com/1D9EgN60pu

If the NFL did threaten to remove DeSean Jackson from the game instead of just fining him that would be a change of policy from past incidents where athletes chose to express themselves on the field. The only conceivable reason I can come up with for the NFL to stop this John Madden tribute is they’re planning an orchestrated league-wide tribute and didn’t want DeSean’s to conflict with that but even that idea doesn’t make any sense.

Meanwhile, Tony Romo had a great John Madden tribute in the booth that you should check out if you haven’t seen it yet.