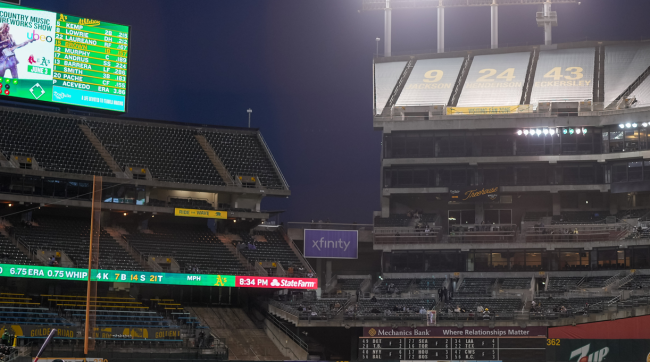 On Monday, July 4th, a mass shooting took place at a Independence Day parade in Highland Park, Illinois that left six people dead and dozens of others wounded.

Monday night, after that shooting had been reported by numerous news outlets, at least four people were reported to have been injured after being struck by bullets at Oakland Coliseum following the A’s-Blue Jays game. One of the victims was reportedly a 11-year-old boy.

According to Oakland police, the four people were injured after the A’s post-game fireworks celebration as a result of being “struck by bullet fragments from what appears to be celebratory gunfire occurring throughout the city of Oakland.”

On Tuesday, the Oakland A’s released a statement addressing the incident, writing, “Following last night’s Oakland A’s postgame fireworks show, officers were notified of a possible shooting victim inside the ballpark. During the preliminary investigation, officers located three fans struck by bullet fragments from what appears to be celebratory gunfire occurring throughout the city of Oakland. A fourth victim walked into a local hospital. All four victims sustained non-life-threatening injuries.”

The statement added, “OPD will continue working closely with the Oakland A’s Security to ensure the safety of all those attending future A’s games at the Coliseum.”

Numerous MLB fans responded with anger and disbelief at the report of injuries caused by gunfire at the Oakland Coliseum.

I was wondering why there was so much commotion. I was there till around 10:40pm in the parking lot watching the other fireworks. It was crazy!

To the people who have said built around the current site. This is why they can’t. Besides that if you go outside a 10 mile radius is not a good look. Now y’all know why they have to move to a different location

Following the shooting in Highland Park, Chicago White Sox closer Liam Hendricks was among the many who expressed disgust at innocent men, women and children being injured and killed as a result of guns being allowed to get into the hands of irresponsible and mentally unstable people.

“Something needs to happen because there’s way too many people losing their lives, and it’s not only about the people who lose their lives,” he told the media. “The families of that, the tragedy they go through, the entire community when people are concerned about leaving the house, concerned about doing the day-to-day things of going to work or any number of these things. We really need to reflect on what’s going on. I don’t think enough is being done.