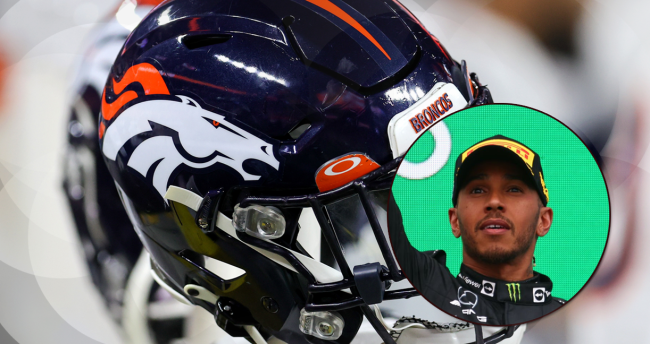 On Tuesday, it was announced that seven-time Formula One champion Lewis Hamilton had joined the new Denver Broncos ownership group.

Hamilton, who is certainly no stranger to winning titles in a sport that requires competitors to wear a helmet, is now a part of the Walton-Penner family ownership group that purchased the team for a record breaking $4.65 billion.

“He is a champion competitor who knows what it takes to lead a winning team and a fierce advocate for global equality, including in his own sport,” new controlling owner Rob Walton, heir to the Walmart fortune, said in a statement. “With over 100 race wins, Lewis is considered the most successful F1 driver of all time. His resilient spirit and standard of excellence will be an asset to the ownership group and the Broncos organization.”

Other members of the ownership group include Rob Walton’s daughter Carrie Walton-Penner and her husband Greg Penner, chairwoman of Starbucks Mellody Hobson, and former U.S. Secretary of State Condoleezza Rice.

Lewis Hamilton had previously attempted to buy the Chelsea Football Club as part of a consortium with deputy chairman of International Airlines Group Martin Broughton and tennis legend Serena Williams. The team ended up being sold to Los Angeles Dodgers part-owner Todd Boehly.

Representatives for the F1 told ESPN back then that Hamilton was planning to invest more than $13 million in that bid. It was not revealed how much he has invested in the Denver Broncos.

Hamilton said in the leadup to the Chelsea sale that if he won the bid and became an owner he would not be very “hands-on” since he still has that whole Formula 1 thing happening.

“Well, at the moment, my primary focus is continuing in Formula 1, and this isn’t my first business venture or investment,” he said. “But yeah, it’s something that I’m excited about. I would say for sure early on I wouldn’t be able to be as hands-on as some of the other people that are a part of it.”

The sale of the Denver Broncos will become official at a special league meeting next week in Minnesota, assuming 24 of the league’s 32 owners vote to approve it.

Fans, who don’t have to wait until then, appear to be all for Lewis Hamilton becoming one of the new owners of the Broncos.

Y’all about to start winning hella super bowls cause this man’s a lucky charm. ✌🏽

So happy Sir Lewis Hamilton is joining the NFL! Definitely will be bring a lot more fans to the NFL and the Broncos!! This man is a F1 GOAT and has a massive following!! Good move!! #TeamLH Proud👏🏼👏🏼👏🏼👏🏼

So they buy the team then sell off pieces to anyone who can afford it? I may be in the minority but I’m not a fan of this. Starting to have too many cooks in the kitchen.

One has to wonder if this had anything to do with Hamilton’s decision…?